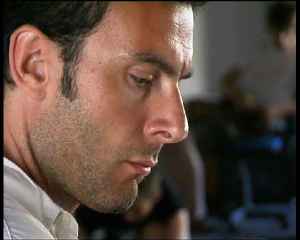 Real Name:
Domenico Sciajno
Profile:
Domenico Sciajno is an Italian musician working on the abstract and experimental fields.
Born in Torino, now based in Palermo (Italy), Domenico Sciajno studied 'Instrumental and Electronic Composition' and Double bass in the 'Royal Conservatory' of Den Haag in Holland.

Sciajno is a long-lasting experimentalist involved in the world of digital music and arts. His interest for improvisation combined with the influences of an academic education brought his research to the creative possibilities for interaction between acoustic instruments, indeterminacy factors and their live processing by electronic devices or computers. The wide spectrum of his experience brings him very close to the concept of performance, where he uses texts and electronics in combination with a choreographic use of the scene space and the projection of visuals made by himself.
His audiovisual compositions and performances bring visual and sonic material together using a completely personal and innovative perspective. In Sciajno’s language, field recording and computer-generated processes coexist in synergetic relations, opening the doorway to an imaginary world where complexity and simplicity alternate and combine in a mesmerizing and abstract symbiosis.
From 1992 he has been present as interpreter, improviser and composer in major international music and media arts festivals like, among others, Ars Electronica (Linz), Transmediale (Berlin), Donaueshingen Miziktagen (Germany), Musique Action (Nancy), Experimental Intermedia (New York), Electrofringe (Newcastle-Australia), Gaudeamus Music (Amsterdam), CalArts Festival (Los Angeles).

His musical and audio releases are documented by worldwide established or independent labels of experimental and electronic music.

Active in the development of experimental art, in 1995 he founded the association Antitesi and from 1995 and 1998 organized a concert series and festival (Antitesi in musica ‘95/‘96, Folk it out! ‘97, i(n)terazioni ‘98, Inaudito! ‘99). In 1997 he collaborated to give birth to the Fringes record label and in 2003 started together with other musicians the label Bowindo and founded the national collective iXem (italian eXperimental electronic music). He conceived and curated the nine editions of Live!iXem, festival of experimental electronic music and mixed arts from 2004 to 2012.
Sites:
sciajno.net
In Groups:
AMP2
Variations:
Viewing All | Domenico Sciajno
D. Sciajno, D.Sciajno, Do Shine'O, Domenico Sciajano, Sciajno