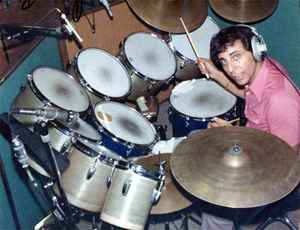 Blaine began his career drumming for various bands that toured back and forth across the States in the 1950s, playing theaters, supper clubs and casinos. He finally hooked up with the Tommy Sands show and learned much of his craft working closely with producers at Capitol Records. Blaine's drumming skills became highly utilized as a session member of the ‘Wrecking Crew’ Collective. He was one of many ‘first call’ players who would sit in for recordings around the Los Angeles area, in studios such as Gold Star Recording Studios, Western Recorders, Radio Recorders, CBS Studios and RCA Victor Studios.

From the late 1950s to the mid 1970s Blaine performed ‘on call’, in many cases anonymously, on over 35,000 tracks of major artists. His work has helped provide more than 350 Top Ten records and over 40 Number One hits. Blaine is also the guy responsible for coining the name ‘Wrecking Crew’ for this team of accomplished musicians who would help to furnish the hits from California.

Occasionally, members of the Crew would come together and release works in their own right. In this respect Blaine featured in the group The Zodiac.