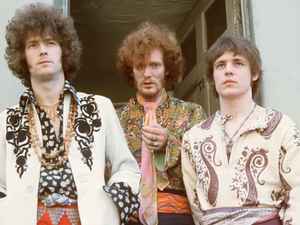 May 3, 2015
How white guys mimicking blues stylings is equal to rock "growing up" I'll never know. I'm sure it was exciting to hear the blues played louder than ever before, but listening to Cream live these days, it gets very tiring hearing Clapton bashing away at his collection of blues tropes, while Bruce and Baker thunder away underneath. Of the three, by far the most progressive was Baker, who seemingly pioneered rock drumming and perfected it by himself, endlessly inventive and free in a way that Bruce and Clapton could never be, tied to regurgitating the riffs and patterns they'd learned off their blues records.
1966 was a year of frantic acid invention - The Beatles released Revolver, Pink Floyd releeased their debut, it was an exciting time of invention and revolution. Cream were a powerful new force combined of the best bits of the British blues scene.
Sadly, it would be this tired and dogged belief in "authenticity" and "grass roots" that eliminated the freshness of the times, during the 70's the market became saturated with worthy white guys playing their interpretations of "real" blues music. Yawn. Far from "growing up", rock music got old and boring.
Contrary to the prior poster, Clapton didn't really knock Lennon and Jagger off their perches, he was only ever a guitar hero to guitar nerds, and he was soon royally dumped on his arse by Hendrix, who took pointers from Cream but surpassed them effortlessly.
The strictures of the new rock classicism were so rigid that few groups were able to stretch them in entertaining new directions, Led Zep and Black Sabbath spring to mind, what a shame the revolution of the mid 60's scene turned into the turgid yawnathon of late 60's and early 70's blues rock - meanwhile the same was happening in the States, where psychedelic bands traded in their indian / acid influences for banjoes and hoedowns. What a comedown!
Reply  See 3 replies Notify me 9 Helpful

December 8, 2010
This "Cream" is without any doubt more popoular than the other "Cream". Why on heart should this be "Cream (2)"?
Reply  See 4 replies Notify me 8 Helpful

October 18, 2009
Cream was the first of the superbluesgroups. Born of the musician's perennial dream of bringing together the cream of the current muscial crop into one mind-boggling all-star group, Cream brought together Ginger baker, master drummer, Eric Clapton, king of the English blues guitarists, and Jack Bruce, superbass. This was early 1967, when those who had outgrown early Beatles and early Beatles imitators were ready to get their teeth into some adult and substantial music, so their timing was perfect.
With Cream rock finally grew up, and Eric Clapton became the all-time rock hero, edging Lennon and Jagger from their pedestals. Although there's been plenty of blues playing around, it took Cream to fully tune a whole new generation in to that kind of muisc. Cream was almost entirely responsible for the blues revival of 1968 and for the great interest in the roots of the new blues-rock. Clapton and Mike Bloomfield (of the Paul Butterfield Blues Band and the Electric Flag) continually gave credit where it was due, talking of roots and sources, bringing up the names of blues originals like B. B. King, Muddy Waters and Howlin' Wolf. It worked two ways for them, for once some of the more astute heard the originals they were less impressed by what Cream and the Bloomfield bands were doing. But that was irrelevant because Cream conquered like no other band did, so that by the end of 1968, when they called it quits, they were able to sell out New York's enormous Madison Square Garden weeks before their "farewell" concert.
To hear them was to be left stoned and stunned. No one had quite seen anything like the way Cream worked-not as an uninspired background for a brilliant soloist, but three major musicians giving it everything from start to finsih. In spite of Clapton, there were no stars, just the music. There had been several seasons of delicate imagery, Donovan and the other poets; Cream gave it out hot and heavy and very physical, which is not to say there was no delicate imagery. Martin Sharp's lyrics for <i>Tales Of The Brave Ulysses</i> are among the most beautiful in the new rock. Clapton's guitar (you knew he had listened and played with every blues record ever made, all the way back to the Mississippi Delta) was as lean and melancholy as his face. Jack Bruce-who could believe he had played on Manfred Mann's <i>Pretty Flamingo</i>-was the embodiment of music: instrumentalistist, vocalist and composer. Ginger Baker was the devil with drumsticks. Each gave the others a run for their money, frantically competing for attention, though never at the cost of what they were playing. In any case, all of them were always winning, which was what made the music so heavy and rich.
Cream's music was essentially interpretative blues and rock, with all kinds of personal versatility but very little cheap flash, and no help from musical friends, except on their last album, in which they did use sidemen. The group always came off live better than on album, and when "Wheels Of Fire" was made, as a two-record set, one record was live. There were criticisms of the albums (after all, the standards set by Cream were high) and there were personal problems (Clapton, particularly, seemed unable to cope with the lack of time and thinking space), but all the same, it came as a great shock, just when they could be said to be the number one group in America, to hear their announcement that they would disband. The only possible consolation at that time was the thought that out of the break could come, after some cunning contractual reshuffling in other circles, not one supergroup like Cream, but three, with Bruce, Baker and Clapton each heading one.
And where was Cream when all the other English groups were happening, from 1964 on? Bruce, who started off singing Scots folk sóngs, was in the Graham Bond Organization, an organ group with jazz and blues influences with which jazz-orientated Ginger Baker also played. Bruce also played with the highly commercial Manfred Mann group for a while, and with the blues-orientated John Mayall Blues Breakers, the group Eric Clapton went to after starting with the Yardbirds. You can hear echoes of all of these groups in a Cream performance, for they all had a lot to teach a young musician, but the format had always been to rigid. Cream represented unheard-of freedom for the three, at first anyway.

When the band was finished, its legacy was everywhere. Until Cream, few groups thought of having solos; then even Ginger Baker's drum solo <i>Toad</i> was widely imitated. Other groups, seeing Cream's huge success with albums rather than "commercial" singles, finally dared to move out of pop back into music-and record companies approved. There is a lot to thank Cream for: the new enthusiasm for blues, the new enthusiasm for rock generally.