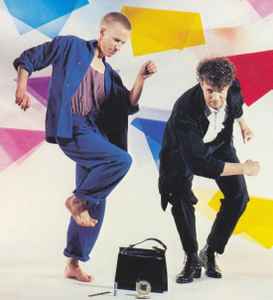 Profile:
British synth-pop duo formed in London 1979 and consisting of Neil Arthur & Stephen Luscombe. They had a string of hits through the early to mid 1980s with songs such as "Blind Vision," "Don't Tell Me," "Living On The Ceiling," "Lose Your Love," "That's Love, That It Is" and "Waves."

The band found their popularity waning by the mid-80's, and with the poor performance of their third album "Believe You Me," they initially split in 1986. They did eventually reform in 2006 and released a new album of original material in 2011, titled "Blanc Burn." Luscombe left following the release due to ill health, and since then Arthur alone has continued to perform under the Blancmange name.
Sites:
blancmange.co.uk, Bandcamp, discog.info, Facebook, MySpace, SoundCloud, Twitter, YouTube, Wikipedia, Wikipedia
Members:
Laurence Stevens, Neil Arthur, Stephen Luscombe
Variations:
Viewing All | Blancmange
Blanc Mange, Blancmanage, Blancmance, Mangeblanc, The Blancmange, ブラマンジェ

July 18, 2021
Love them. A big fan of their old albums, and the new ones are definitely worth to listen.

June 20, 2021
These two are circling the drain with these crappy recent albums...they reeeeally oughta retire. And I thought modern day Depeche was terrible...

July 18, 2020
In the third photo of the image section on this page is that Vince Clarke (it looks like him)? Is he just there as a friend or did he have some input in the music (or maybe it is Laurence Stevens)?

As for laserdiscs' comment below ("the group is just not that good") - with music it is not easy to empirically state which pop group is 'better'; ESPECIALLY when they are different kinds of music. Blancmange have a distinct sense of humour in their music, though Waves is emotional / quite 'heavy' (love it), most of Blancmange's music is light, can be satirical, an alternative to melodrama; and the electronica, though common in the Eighties, is more central to their sound.

The examples used sort of proves the point. I liked the earlier Duran Duran and some Spandau Ballet, but I certainly didn't like the direction either band went. I couldn't stand SB's Gold, it just wasn't to my taste. Personally I prefer the full breadth of Blancmange's output to the examples cited. Excluding A-ha, but I wouldn't compare Blancmange to A-ha.

"Success" as a measure of quality? Strange comment, doubly so for Eighties music which championed a more equal footing to the Indie scene. A-ha is also an odd example, I don't really like speaking negatively of groups, A-Ha's first three albums are brilliant - I'll leave it at that.

For me Blancmage ARE "that good" and it is a matter of taste when it comes to who is 'better'.
See 3 replies

June 21, 2020
Contrary to the other comments posted, the group is just not that good. Understandably, synth pop or electro caters to people who like their music left of the mainstream. Having said that, there is a reason bands like Duran Duran, Spandau Ballet and Aha were much more successful, that being, the songs were written better. You can be good at your craft and still have songs that do not catch the listeners attention or for that matter, catch anyone's attention! When you listen to Culture Club & Depeche Mode, the songs flowed better with hooks and riffs that reel in the listener. Lets face it, the song writing from Duran Duran and especially A-Ha was far better than this group and that is what it all boils down to -good songs
See 1 reply

January 13, 2017
As Culture Club and Depeche Mode seemed to grab all the electro attention in the 80s Blancmange were a band which escaped under the radar for many.
Recommended by Duran Durans' lead singer Simon le Bon (he and Neil Arthur had met at University) the band are wrongfully labelled as one hit wonders owing to their big hit "living on a ceiling". Tracks such as waves, lose your love, blind vision and even vishnu are worth checking out if you like your left field, electro from a duo who had so much talent. Still touring to this day, Blancmange are continually still flying the flag for electro music, but don't have the same cutting edge they did in the 80s, one thinks their career is perhaps a bit wobbly now, set in their ways...ok ill stop!! but they were underrated in their day ;)

Blancmange were less aware of pop with 'Irene & Mavis' which was recorded in 1979 and stopped right there. A six track EP, rather experimental, echoing Cabaret Voltaire more than Depeche Mode in their sound. Originally a three piece (at first called 'L360' or something) with drummer Laurence Stevens (strange enough, the guy with the same name designed later record sleeves for Eurythmics, I wonder). 'Irene & Mavis' proves a collectible obscurity, omitted even from these pages as a mention - a combination of weird noise ('Disco A-Bomb-Bomb', 'Overspreading Art Genius, 'Modichy In Aneration') and a potential piss-take over ska bands ('Concentration Baby'). A slight hint of what was about to happen, came in a synth-pop tune 'Just Another Spectre', a moody instrumental giving much thought to the duo's first proper vynil exposure with semi-legendary V/A sampler 'Some Bizzare' (a track 'Sad Day'). After this Blancmange took more conventional, often surprisingly innovative step towards pop - 'Happy Families', their debut albums still stands as the most essential of the lot - 'Mange Tout' and 'Believe You Me' provoked mixed response and despite a number of impressive hits the duo split starting solo projects. Neil Arthur returned sometime in the 90s with Fortran 5 on their excellent single 'Persian Blues'...