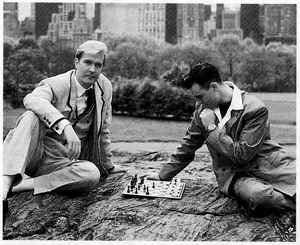 Profile:
ABC is a British pop band from Sheffield, UK, formed in 1980, best known for songs like The Look of Love and When Smokey Sings in the 1980s. Since 1997, ABC has been the solo project of singer and founder Martin Fry, who works with a variety of musicians.

White and Singleton started out as Vice Versa (4), who released an EP "Music 4" in 1979 and contributed the track "Genetic Warfare" to a compilation, "1980: The First Fifteen Minutes" before adding Fry to the lineup and mutating into ABC.

During the late '70s, Fry ran his own fanzine, Modern Drugs, while he attended Sheffield University. ABC formed in 1980, after Fry interviewed Vice Versa members Mark White (guitar) and Stephen Singleton (saxophone) for his fanzine. The two musicians asked Fry to join their band as a vocalist, and he soon became part of the group; the lineup also featured drummer David Robinson and bassist Mark Lickley.

Soon, Fry had taken control of the electronic band, he recruited Trevor Horn as producer to steer them in a more pop-oriented direction and renamed the group ABC. By the fall of 1981, the band had signed a record contract with Phonogram Records, which agreed to distribute ABC's own label, Neutron. ABC released their first single, "Tears Are Not Enough," in November; it peaked at number 19 on the U.K. charts.
Sites:
abcmartinfry.com, Facebook, instagram.com, MySpace, Twitter, whosampled.com, Wikipedia
Members:
David Palmer, David Robinson (23), David Yarritu, Eden (15), Mark Lickley, Mark White, Martin Fry, Stephen Singleton
Variations:
Viewing All | ABC
A B C, A.B.C, A.B.C., A.B.C. Sound, AB&C, ABC.

September 17, 2014
thanks your note Crijevo, I was unaware of their previous incarnation of Vice Versa, I shall go hunting for some of that now!
not sure if the state of perfection can ever be achieved, but I think it's fair to say that ABC come very close with not just one but many of their beautifully crafted creations.
a quality act indeed!
See 2 replies

January 30, 2003
ABC is a perfectly simple name for a group who swore to write perfect pop songs ever since... However, it is a less known their origin in Sheffield avantgarde scene called Vice Versa (one of the most perfect all-time names to call a band), which only points out to their perfectionist stance as truly embraced (and eventually disappointed) by punk and its cyclical fashions (their own anti-consumerist anthem 'Artists at War')... The way The Human League sold their soul, Vice Versa were their dark twin brother; the way 'Dare' collided down the mainstream corridor with Philip Oakey unable to repeat it again ever after, Vice Versa turned from the incredibly chaotic minimalist electronic noise-some into a more soulful fraction ABC that immediately striked against the tide with their own organised sound structure intended to a wider pop-market. Some called it pretentious and cynical. But it's not really. It's a perfect product. 'The Lexicon of Love' might remain a curse of momentary trends that fitted in perfectly at the time for the group, as their sound heavily progressed throughout the past twenty years in various directions, still they make it all quite timeless and appearently memorable experience.