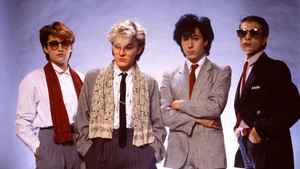 After three albums with Ariola-Hansa, they switched to Virgin Records in 1980 and found their fortunes dramatically improving thanks to the surge of popularity in the New Romantic movement. Japan's androgynous image made them suddenly fashionable and they registered several UK Top 20 singles. Their albums Gentlemen Take Polaroids (1980) and Tin Drum (1981) were also well received. Rob Dean left the band after Gentlemen Take Polaroids but continued working with the band for one more tour thereafter.

January 4, 2022
Am I right to take issue with Masami Tsuschiya being listed as an official member of the band?
See 3 replies

June 22, 2021
Adolescent Sex was the first album, but it's incorrectly in second place above after Obscure Alternatives which is the second album. Great band all the same and one of the best Bowie/Roxy influenced bands. They quit at their peak unfortunately but inspired a big chunk of 80s pop acts especially Duran Duran, Tears For Fears and a host of New Romantics.

September 10, 2020
Love this band, they were ahead of their time, but being called 'Japan' you'd think they'd be able to pronounce Tokyo as 2 syllables not 3, just nitpicking here sorry...
See 1 reply

April 21, 2019
One of the most underrated bands of the 80's, their great experimental work was refreshing compared to most other acts at the time. Life long fan of these guys.
See 5 replies