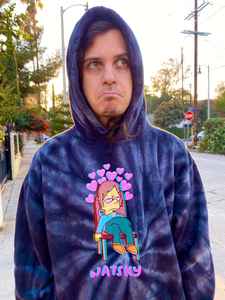 Real Name:
George Watsky
Profile:
A successful slam poet turned rapper, Watsky first gained attention through ‘Russell Simmons’ HBO Def Poetry’, and a later burst of viral success for his fast rapping. At every turn, Watsky has refused to be pigeonholed, following up his speed rap success with 2013 LP Cardboard Castles, an eccentric ode to creativity, and 2014’s Anderson. Paak-produced All You Can Do. After a hiatus to work on new material, Watsky pivots again, this time to prose, returning simultaneously with the essay collection How To Ruin Everything, published by Plume/Penguin-Random House, of which Hamilton creator Lin-Manuel Miranda writes, “funny, subversive […] you find yourself nodding your head in wonder and recognition.” How To Ruin Everything debuted in the New York Times best selling list. Watsky released his fifth album, ‘x Infinity,’ August 2016, describing it as his most ambitious project yet.
Sites:
georgewatsky.com, Bandcamp, Bandcamp, SoundCloud, Facebook, MySpace, Twitter, YouTube, Wikipedia
In Groups:
Invisible Inc. (7)
Variations:
Viewing All | Watsky
George Watsky

February 22, 2021
Amazing rapper, amazing poet, I'd recommend starting with the album Cardboard Castles.
As far as his latest stuff goes (the 2 eps Complaint and Placement), there's a lot of good songs but I've been really into the 10 minute song on Placement ("Dreams and Boxes"). The middle section is his remembrance of a dream about "a party in a house falling out of the sky". Lots of great dream logic in that section, and some really moving lines. Before the dream section is an inspirational section about the people in your life that help you recover after failure. "This one is for the people who raise me up, for the people who raise me up, if you remember one thing then remember how it felt when you fell for the first time". The past few weeks when I think of the album out of nowhere it's usually those lines that come to mind first.