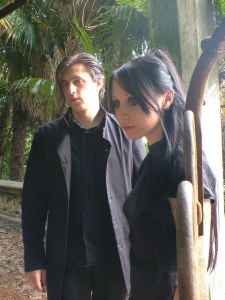 Profile:
The band was formed in 1999 by Federico and Francis. The first steps did not have an exact direction, but then, while revisiting “La Belle Dame Sans Merci” (the John Keats’ poem), the work of the band began to focus on the enchanted world of the faeries, more or less rooted in every land’s folk-lore. Viola and Raffaella, both singers and flautist, after listening some songs the band was working at, decided to join. The musical style became more romantic and folk than medieval as was at the initial times. After a few researches and after reading books like “Faeries” and “Good Faeries/Bad Faeries” by Brian Froud, some faerietales and some figures began to loom, becoming eventually songs. Some of them have been recorded in the first demo cd called “Hollow Hills”.
The work had good rewiews in some Italian fanzines and the first song “Asrai” appeared in an Italian compilation enclosed to the fanzine “ROSA SELVAGGIA” and was played during the radio transmission “Alternative Ocean” in the local radio “Onde Furlane”. This incited the band to go on with the researches and in the creation of new songs.
The interest of the band began to focus then on the spirits of the water. The band put together all the stories and the tales that tell about faeries, witches, elves and everything else living in the water. Water that can be rain, the water of a river or of a lake but can be also a tear. From this the name of the second work: “In a sea, in a lake, in a river … …or in a teardrop”. This should have been the second demo CD, but after listening to it, Gianfranco Santoro of the small independent label “Sin Organisation”, decided to release it in a limited version of 300 copies.
The debut album is now almost sold out, and during 2003 the band recorded a full-length called ‘Chamber Music’, a collection of song-settings of James Joyce poems.
After recording ‘Chamber Music’, Francis left the band, the only members are now Federico and Viola. With this formation the band faced up the first live performances.
Sites:
allmyfaithlost.com, Bandcamp, Facebook, MySpace
Members:
Federico Salvador, Francis M. Gri, Raffaella Missio, Viola Roccagli
Variations:
Viewing All | All My Faith Lost ...
All My Faith Lost, allmyfaithlost...

In my opinion, intelligent band, by all means. They reached the highest level in composing for acoustic guitar and grand piano with layers of clean acoustic strings sometimes. Vocals are done by man and woman so the polyphony is high. Music usually produces the atmosphere of philosophical chat or concert in the philharmonics. Helps to relax and think of something higher than the ordinary everyday life. Beautiful and harmonious, magically spirited waves...