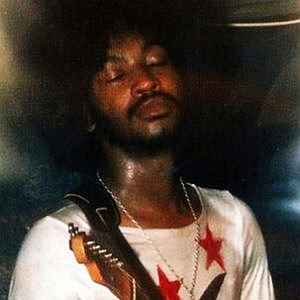 Real Name:
Edward Earl Hazel
Profile:
For the jazz journalist, use Ed Hazell.
For the jazz/blues guitarist, use Eddie Hazell.
Eddie Hazel, b. 10 April 1950 Brooklyn, NY, was one of the original Parliament / Funkadelic members in the beginning of the 70’s. He had been a session player for George Blackwell when he was 17, until he was persuaded to move by George Clinton and Billy Nelson. He’s probably the first lead guitarist to play hard-rock / funk fusion twenty years before Living Colour, Fishbone or the Red Hot Chili Peppers.
With great solos like on the legendary « Maggot brain », it is obvious that Eddie Hazel is the biggest funk guitar-hero and his influence on other funk guitarists (even in the P.Funk camp) is indeniable.
His involvement with the George Clinton posse became less preeminent in the 80’s when P.Funk turn more electro-funk oriented and after some drug problems.
Eddie Hazel died on 23 december 1992 at the age of 42.
He has released one solo record for Warner Brothers in 1977 and one posthumous CD was released (as well as unreleased material on several recordings) in 1994.

December 23, 2013
All of the Pfunk side releases are interesting, but it's a shame Mr Hazel didn't get his stuff together long enough for another record or two.
Reply Notify me 4 Helpful