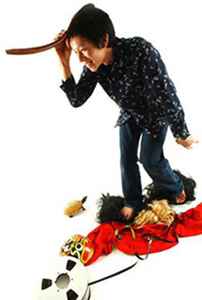 Real Name:
Taichi Moriguchi
Profile:
Born in 1979. Lives in Osaka.
Started performing as OORUTAICHI in 1999.
Oorutaichi began his career in 1999, inspired by artists such as The Residents and The Doors. In an effort to crystallize his inspirations he compiled his initial recordings into a cassette album called "?".
The songs were multi-tracked improvisations performed all by himself.
His free-wheeling melodic talent which had been developing in his unconsciousness and his improvisational singing in a language of his own were set off by the "pathos" of dancehall reggae. These evolved into a style that layered his singing on top of programmed tracks.
He released his first album, "Yori Yoyo" in 2003, followed by "Drifting my folklore" in 2007. "MISEN Gymnastics EP" was released by Bearfunk in the U.K. in 2007. He has also provided remixes to many artists including Shugo Tokumaru and I am Robot and Proud. His other musical activities include band Urichipangoon, of which he is the lead singer/composer, and various sessions and units with other musicians.
He has also been venturing outside the conventional music scene, providing music for theatre and plays as well as collaborating with Masako Yasumoto, one of the leading young contemporary dancers in Japan.
Oorutaichi has been active abroad as well, performing the first stage for Juana Molina's show in Philadelphia during his spring 2009 tour of the U.S, and touring a month in Europe later that year. His U.S. tour also included a performance at the SXSW in Texas. In May 2010 he performed at the Biennale of Sydney. Oorutaichi is continuing his quest for music that spans all continents and one that no one has ever heard before.
Sites:
okimirecords.com, Bandcamp
In Groups:
Obakejaa, Oorutaichi Loves The Acustico Paz Nova Band, Oorutaichi+Ytamo, ウリチパン郡
Variations:
Viewing All | Oorutaichi
オオルタイチ