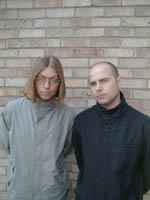 Profile:
The pair first met in 1987, both living on Blackbird Leys estate in Oxford, England and brought together through a mutual love of hip-hop. Distracted by the arrival of hardcore in the early nineties, record collecting was quickly followed by DJing and eventually production.

Greenhalgh was the first into the studio, with "Freestyle Fanatic (EP)" as Q Project launching his career in 1991. However it was the establishment of the Legend imprint and specifically Greenhalgh's track "Champion Sound" from the "Return Of Q. Project", which really took their profile above and beyond the slew of anonymous white labels that were dominating the music at the time.

In 1994, the pair started recording together, with "Got To Believe" the first in a series of records which pushed the label away from the fizzling darkside movement and more towards the epic string sections and rolling beats which started to appear on labels like Lucky Spin Recordings, Basement Records and Good Looking Records. They also worked Saturdays in the Record Basement shop in Reading.

After six years of recording singles for others, the pair established the C.I.A. label in the closing months of 1997 with the help of Brillo from Timeless Recordings. The release of "Silent Reign" for Goldie's label Metalheadz, breathed a new lease of life into the project, and the pair achieved a further boost with a well-timed Bad Company remix of "Champion Sound" which conjured further interest in what they were doing at their own label.

Their debut album "Advance" exposed a further field of interest, with downtempo experiments logged as a series of 'breaks' on the majority of their early EP's extended to some superb deep house, this breadth taken a step further with their Skindeep imprint which has forged broken beat to considerable acclaim.

February 12, 2022
Total Science for me are up there as some of the best drum and bass producers of all time. Variety of styles spanning through decades with great consistency. Legends.

June 16, 2021
Total Science are some of the best & most prolific producers we have ever seen. I feel like they are recognized but not quite appreciated enough. They can do any style. They can sound like "Total Science" or "Q Project", or they can sound completely different. They are simply amazing and we are lucky to have them.

February 7, 2021
Throughout the years, Total Science never ceased to impress in terms of creativity and sound design! Their production quality is ace! Also, their style ranges from being liquid, deep, minimal & atmospheric to that of neuro infused tough basslines but still putting forward the rawness of drum & bass! Highly recommended producers to check out who have been on the scene for over 25 years!

February 26, 2017
Just to follow up my prior comment below - there is a recent interview with TS, one of the questions being:

There’s something that I saw mentioned in a Youtube comment on one of your tracks recently that I thought was pretty interesting. A lot of your tracks seem to have very sexually suggestive names. Some of my favourites include: ‘Muff Diverz’, ‘Rim Job’ and ‘Rug Munchers’. Are there any stories behind these?

Hahaha, to be honest I couldn’t tell you. It would sometimes come from a joke we had in the studio that just stuck. I know we had one once that we brought to a label and they were like “we’re not putting that out”. I can’t remember the name of it now. But yeah we were partying a lot in them days so the track titles probably reflected that.

December 28, 2016
Use to buy their records without a listen due to their consistency of high level dopiness. Which is a good thing folks.

August 29, 2016
If you're into the more melodic type of Total Science, go to Funky Technicians now!!!

20+ years, 400+ tracks, appearing on hundreds of releases, and virtually all labels.

Yet impressive quality control and consistency.

Lurking in Broken Beat, Future/Nu-Jazz, Drum and bass, trying out everything, yet they find their signature thingies in all genres.

It's so great to simply just think about these folks. Only good and positive thoughts come to your mind.

Although something I have never understood: what's the deal with all these porn-erotic-romantic-deep titles? Not that it matters to me, but I can't be the only one who noticed it. I mean, apparently Muff Diver is a cocktail, a Hen Night can end with anything, Rated X is something general, Just Kisses are Just Kisses, but...Sophisticated Bitch?
See 4 replies

November 6, 2014
Legends from the start. These boys are true veterans of the scene.