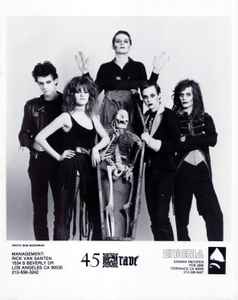 Profile:
During 1979-1990 in Los Angeles, the band was born in the chaos of the Punk movement and churned out their own brand of Ghoul Rock that later was labeled the Deathrock / Gothic genre.

The song "Partytime (Zombie Version)" made it onto the movie sound track for RETURN OF THE LIVING DEAD. Partytime made full rotation on MTV (1984) and the song "Evil", debut on MTV's The Cutting Edge in 1985.

45 Grave are cited in several rock music biographies to being a huge influence on many of the bands that surfaced from the L.A. scene. Their hit song Partytime is still licensed for tv and radio ads today.

The bands momentum took a hit in 1991, when bassist Rob Graves passed away from an accidental overdose. The other members went their separate ways, pursuing their own musical projects.

March 1, 2021
Love this classic band. Sleep in Safety is my favorite.
Reply Notify me 1 Helpful

Favorite Artists by sombrio
Female-Fronted by Donut_Duck
Goth Rock 1979-1990 by M.Isaev
Artists Played On “Dark Wave” by crimsonmetal74
Artists In My Music Collection by ruido
“The Encyclopedia Of Punk” by crimsonmetal74
punk on estrogen ► 70s-80s by noinim
Seen 'em live! by markm65
SƘƩLƩTÖƝ ƘİSS ƦɅĐIØ ' ' ' women of deathrock by noinim
Goth Bands by sgath92
Folks I've Seen Live by rexjwb
Favorite artists by TheAvantGardener
Bands I Saw Before I Turned 21 by mr.dna
Favorite Artists by Xiao-Mei-Pale-Fire
MAW List by assassing
Shit I like by MonochromeReflection
Recommended Post-Punk Bands by SarahFreer
Favorite Bands by SarahFreer
View More Lists →