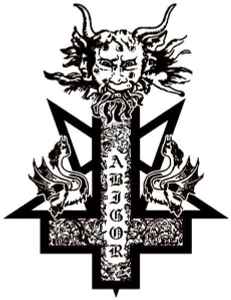 Profile:
Abigor is an Austrian black metal band founded in 1993 by PK (guitar) and TT (guitars/drums). They were soon joined by Rune (now known as Tharen of Amestigon) who did the vocals. In the autumn of the same year they released the demo "Ash Nazgh..." and in December they released "Lux Devicta Est". In early 1994 they released the third demo simply titled "Promo Tape 2/94" and the fourth and last official demo, "Moonrise". After the tapes Tharen was replaced by Silenius and the band recorded the rehearsal tape "Hate & Sin" to test the new vocalist and prepare for the first album, signed to the Austrian label, Napalm Records.

In June 1994, they released "Verwüstung / Invoke the Dark Age", which marked them as one of the best bands in their genre. Same year, November, they released "Orkblut - The Retaliation", which was a concept work about the life, death and spiritual quest of a pagan warrior. In 1995 they released "Nachthymnen (From the Twilight Kingdom)", which proved Abigor can make majestic soundscapes of dark atmospheres at its best. Same year they started the recordings for the first chapter of 'Opus IV', entitled 'Horns Lurk Beyond the Stars'.
In May 1996, they finished the second chapter, "Blut Aus Aeonen", for "Opus IV", which was released July 1996. In 1997, the MCD "Apokalypse" was released. It took the band two days to record it and it was their most brutal record so far. In 1998 "Supreme Immortal Art" was released as CD (the last album in the classic 90s line-up PK/Silenius/TT) and studio outtakes of 2 tracks were used for the 7″ "Structures of Immortality". Fans kept asking about material from demos to be released, so Abigor decided to release a limited CD titled "Origo Regium 1993-1994", which comprised of some songs from the demos.

During the recordings of the next studio album, "Channeling the Quintessence of Satan", Silenius left the band and was replaced by Thurisaz (with whom TT already had a Thrash band in the 1980s). The album was recorded and released the same year, and TT left Abigor soon after Silenius.
In 2000 PK and Thurisaz started the work on "Satanized (A Journey Through Cosmic Infinity)", Moritz Neuner joined as drummer. "Satanized" was released in 2001, and PK as the only remanining original member, ended Abigor in 2003.
In March 2006, the original line-up consisting of TT (guitars/drums) and PK (guitars) reunited Abigor, with AR (Arthur Rosar) as the new vocalist and End All Life as new label. in 2013 Silenius rejoined Abigor and the classic 90s line-up was completed. Currently, Abigor record for Avantgarde Music and release CDs, vinyls and tapes on EAL/Noevdia and W.T.C.

In 2005, P.K. considered reforming Abigor without any original members, but ended up reuniting the band with its original line-up a year later after learning of T.T.'s return to the black metal movement.
The group's distinctive sound makes heavy use of multiple layered guitar parts by both members. Although bass guitars were featured on most of Abigor's recordings until "Opus IV", they were mixed to almost inaudible levels, hence the widespread misconception that the band uses no bass. Some of their later releases also feature bass again.

For a short period in winter 1993-1994, Abigor was part of the Austrian Black Metal Syndicate, a movement founded by Pazuzu, along with Trifixion, Pervertum, Golden Dawn, Summoning, Vuzem, Knechte des Schreckens, Cromm. Abigor departed the syndicate soon after, however, shortly followed by Summoning. The ABMS name resurfaced years later on a CD compilation, but had nothing to do with the early form.
TT was actively involved in Napalm Records, a label which rose with the success of Abigor. Helping with concept, promotion and designs, he also conceived the compilation "With Us or Against Us" in 1995 to establish the label's focus on black metal, during which time the bands Nåstrond, Ildjarn, Setherial, Unpure and others were signed. After his engagement decreased in 1997, Napalm Records changed direction to gothic metal and commercially relevant styles.
Silenius was recruited to record vocals for the band's 2014 album, but he is considered a session member in that regard and his return is not permanent.