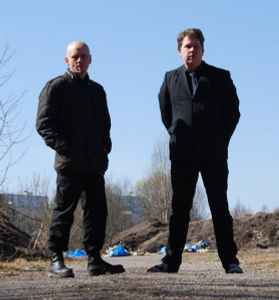 Real Name:
Fredrik Djurfeldt, Ulf Lundblad
Profile:
It all began in the year 2000, some time during the summer. Fredrik Djurfeldt and Ulf Lundblad happened to be in the same place at the same time. Since then they have released five official albums, some singles and a whole lot of other stuff.

When PAF records, who had released their debut Discipline is Reward Enough in 2003, closed shops, Severe Illusion moved to New Mexico based "Dangerous Sharks Biting People" (DSBP) who released the sophomore album, Accomplishments of Leopold II, in the year 2005. In late 2006, "Double Shotgun Barrel Politics" (DSBP) also released the album Shortcut to civilization. During the same period, a split 12" vinyl thing called Fight your lodging elsewhere/Hyper decease EP was made together with EBM/Power Noise legends The Pain Machinery.

In 2011, the band made a massive comeback on Complete Control Productions (CCP). The album 'No More Alive Than You Deserve' was released in September and followed by live shows in Europe and South America. In 2013, their fifth full length album, Deliberate Prefrontal Leucotomy was also released on CCP. More live shows acorss Europe are also under way.