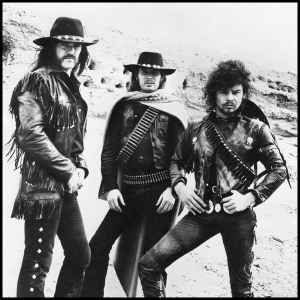 Profile:
Motörhead were an English rock band formed in June 1975 by bassist, singer, and songwriter Ian Fraser Kilmister (1945–2015), professionally known by his stage name Lemmy, who had remained the sole constant member. The band are often considered a precursor to, or one of the earliest members of, the New Wave of British Heavy Metal, which re-energised heavy metal in the late 1970s and early 1980s. Despite this, Lemmy had always dubbed their music as simply "rock and roll".

To its end, Motörhead had released twenty-three studio albums, ten live recordings, twelve compilation albums and five EPs. Usually a power trio, they had particular success in the early 1980s with several successful singles in the UK Top 40 chart. The albums Overkill, Bomber, Ace of Spades, and particularly No Sleep 'til Hammersmith, cemented Motörhead's reputation as a top-tier rock band. As of 2012, Motörhead have sold more than 15 million albums worldwide.

Motörhead are typically classified as Rock N Roll by Lemmy and band members, and their fusion of punk rock into the genre helped to pioneer speed metal and thrash metal. Their lyrics typically covered such topics as war, good versus evil, abuse of power, promiscuous sex, substance abuse, and, most famously, gambling. The name "Motörhead" is a reference to users of the drug amphetamine. The band's distinctive fanged-face logo, with its oversized boar's tusks, chains, and spikes, was created by artist Joe Petagno in 1977 for the cover of the Motörhead album and has appeared in many variations on covers of ensuing albums. The fanged face has been referred to variously as "War-Pig" and "Snaggletooth". The band is ranked number 26 on VH1's 100 Greatest Artists of Hard Rock.

When Lemmy Kilmister died in December 2015, Mickey Dee declared that Motörhead (officially) is disbanded. No more tours or albums will be made. Only the brand will survive for the future.

May 18, 2021
I started listening to Motorhead when "Rock´n`Roll" came out. Lemmy and Motorhead have always been a part of my life since then. It hurts that they are gone. Sometimes I think that Lemmy knew when it was the right time to leave - a lot of crazy stuff is happening since he left...
DON`T FORGET MOTÖRHEAD!!!
See 1 reply

December 31, 2019
Just finished Mick Wall's biography of Lemmy. Found myself with tears running down my face during the last few pages that described Lemmy's last few months...how he kept going, touring despite the fact that he was dying. Almost seems to me that everything but playing live was superfluous to him. I listened to Motorhead for almost forty years, and in that time my view of Lemmy went from seeing him as this horribly ugly, lycanthropically howlling near person to viewing him as a deeply flawed, oddly moral entity, that somehow, may actually have understood the concept of how to be a human being just a little better than most of us ever will. One of my biggest regrets is that I never actually saw Motorhead live, so all I can do now is wish a belated R.I.P. to Lemmy, Philthy, Fast Eddie, Wurzel and anybody who I missed. In a strange way, you guys helped me grow up. I only hope that I can refuse to grow old until the very end...just like Lemmy.
See 1 reply

October 5, 2018
Motorhead changed my life forever at the age of 15, saw them live on the Bomber tour then lost count of how many time since. Have two of Lemmys plectrums, one from Nottingham Rock City the other from Manchester Apollo. 54 years young now and listen to motorhead everday!!! If you don't like Motorhead you have no soul!!!!
See 1 reply

April 22, 2018
ain't a goddamn band in the world who can do half what they did. long fuckin' live, motörhead.

p.s. lemmy, if you're out there, and you're reading this: my baby cousin loves your stuff. he's three. thought you'd like to know that.

August 17, 2017
RIP Lemmy. You will always be a huge inspiration for me and all metalheads who will discover you in the future. See you on the other side brother.

Born to lose, but lived to win.