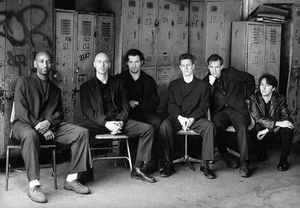 Profile:
The The is an English musical and multimedia group with singer/songwriter Matt Johnson being the only constant band member. The group has no permanent group line-up, and Johnson has collaborated with a wide range of musicians, changing personnel from project to project.
The The began recording in 1979/1980 and released their first single “Controversial Subject” in 1980. The first album release came in 1983, the critically acclaimed “Soul Mining", which featured guest appearances from Orange Juice (3) drummer Zeke Manyika, Jools Holland, Thomas Leer and J.G. Thirlwell.
Johnson followed with a new album entitled “Infected” in 1986, recording again with Zeke Manyika, plus singer Neneh Cherry, and a number of session musicians. Four singles were released from the album, with "Heartland" being the most successful, reaching 29 in the UK Chart. The album was accompanied by a full length video “Infected: The Movie” which was shot on location in Bolivia, Peru and New York. Johnson toured the world extensively with the movie.
In 1988, Johnson re-formed The The as a four piece band, having recruited ex-The Smiths guitarist Johnny Marr, bassist James Eller and former ABC drummer David Palmer as full time band members. This line-up recorded the album “Mind Bomb”, which debuted at No. 4 in the UK Albums Chart and featured the band's highest charting single to that time, "The Beat(en) Generation" hitting 18 in the UK chart.
In 1989 keyboard player D.C. Collard was added to the line-up and the band embarked on a lengthy world tour in 1989–90 called “The The Versus The World”, culminating in three sold out gigs at London's Royal Albert Hall at the end of the tour.
In 1990 the studio EP “Shades of Blue” was released.
In 1993, the five-piece line-up (Johnson/Marr/Collard/Eller/Palmer) recorded The The’s fourth album “Dusk”, which debuted at No. 2 in the UK. Another world tour followed, the “Lonely Planet” tour. Johnson relocated the band to America, at which point the band's line-up was reshuffled; Marr and Eller left, and were replaced by guitarist Keith Joyner and bassist Jared Michael Nickerson. Harmonica player Jim Fitting (formerly of Treat Her Right) joined the band in early 1993. Palmer left the band partway through the tour and was replaced by ex-Stabbing Westward drummer Andy Kubiszewski. The reshuffled band headlined the main stage at the 1993 Reading Festival.
Johnson then permanently relocated to New York, and The The's next project was 1995's “Hanky Panky”, an album that consisted entirely of Hank Williams cover versions. “Hanky Panky” was recorded by a new The The group, this time consisting of Johnson, Collard, Fitting, guitarist Eric Schermerhorn, bass guitarist Gail Ann Dorsey, and drummer Brian MacLeod. Their cover version of "I Saw The Light" hit No. 31 in the UK chart.
In 2000, The The, now consisting of Johnson, Schermerhorn, bassist Spencer Campbell and drummer Earl Harvin, released its sixth album “NakedSelf” and embarked on yet another lengthy world tour, “The Naked Tour”, lasting 14 months. “NakedSelf” remains The The's final released studio album to date.
Since 2003 the reclusive Johnson has kept well away from the public eye and has concentrated primarily on soundtrack work, scoring numerous documentaries, films and art installations.
In April 2014 The The announced that on June 30th 2014 a re-mastered, re-packaged version of "Soul Mining" would be released to commemorate the 30th Anniversary of its original release.
Sites:
thethe.com, instagram.com, Twitter, Facebook, YouTube, Wikipedia
Members:
Colin Lloyd-Tucker, David Collard, David Palmer, Eric Schermerhorn, James Eller, Johnny Marr, Keith Laws, Matt Johnson, Steve Sherlock, Tom Johnston (2)
Variations:
Viewing All | The The
The, The - The, The-The, TheThe

May 20, 2020
Anyone hear anything about a Dusk reissue on vinyl? I love that album and would love to have it on vinyl.
See 2 replies

April 20, 2020
For all those asking about PoD and rarities, our prayers have been answered!

October 20, 2018
Anyone know if the early rarities CD is genuine release or bootleg as its not shown on here. Thanks
See 3 replies

September 30, 2018
Has anyone been able to locate a copy of "The Pornography of Despair"?
See 2 replies

September 29, 2018
Most underrated band in the World and also my favorite band. Discovered them with the Soul Mining album and I still listen all of their stuff decades later.

September 23, 2017
As most bands seem content to throw a box set together that just features a remaster of an album recorded in perfect conditions with a "bonus" live disc SURELY the world needs a The The box with unreleased albums/unrealised projects / b-sides etc. Or failing that a brand new album?
See 1 reply

May 31, 2017
One of the best artists of all time. Only problem is that some of MJ's best work is unreleased or really hard to find/unavailable on CD. Spirits, Pornography of Despair and all those early b-sides. Amongst DVDs/Blu-ray of Infected and Versus the World, it would be amazing to see those unreleased gems out finally. For now we'll just have to live with the fantastic tracks we have already!

April 8, 2016
without a doubt one of the worst bands ever - what with the name and of course the so called muzac....
See 8 replies