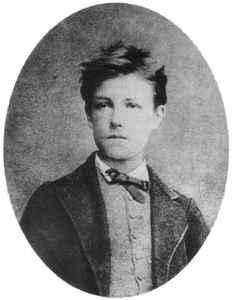 Real Name:
Jean Nicolas Arthur Rimbaud
Profile:
(October 20, 1854 Charleville, France – November 10, 1891 Marseille, France)
Arthur Rimbaud was a precocious boy-poet of French symbolism, wrote some of the most remarkable poetry and prose of the 19th century.
His highly suggestive, subtle work drew on subconscious sources, and its form was correspondingly supple and novel. Rimbaud has been identified as one of the creators of free verse because of the rhythmic experiments in his prose poems Illuminations (1886). His Sonnet of the Vowels (1871), in which each vowel is assigned a color, helped popularize synesthesia (the description of one sense experience in terms of another), a device widely exploited by the symbolists. The hallucinatory images in The Drunken Boat (1871) and Rimbaud's urging, in Letter from the Seer (1871), that poets become seers by undergoing a complete derangement of the senses also reveal Rimbaud as a precursor of surrealism. Following his own dictum, Rimbaud lived an inordinately intense, tortured existence that he described in A Season in Hell (1873).
Sites:
Wikipedia
Variations:
Viewing All | Arthur Rimbaud
A. Rembo, A. Rimbaud, A.Rimbaud, Arthor Rimbaud, Arthur, Arthur Rimband, Artur Rembo, Artur Rimbaud, J. A. Rimbaud, J.A. Rimbaud, Jean Arthur Rimbaud, Jean-Arthur Rimbaud, Raimbaud, Rim Rimbaud, Rimbaud, Rimbeaud, Αρθούρος Ρεμπώ, Ρεμπώ, А. Рембо, Артюр Рембо