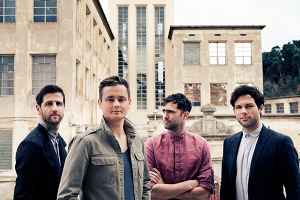 Profile:
Keane are an English rock band from Battle, East Sussex. They are recognized worldwide. The first three years from 1999, the earliest known recordings, to 2001 Keane were a guitar band featuring Dominic Scott. Taking a step in another direction, after ridding themselves of Scott in late 2001, they moved more to a piano band using Tom Chaplin's soft voice and falsetto to front the band. Keane's earlier work was guitar band but after 2001 it had a particular piano-based, melodic style that many have compared with Coldplay. Their third LP, Perfect Symmetry, embraces a wider range of electronic textures, including the use of guitars, which were first re-introduced in the band's work on the promotional tour that followed the Under the Iron Sea album.
Sites:
keanemusic.com, Facebook, MySpace, Twitter, Wikipedia, YouTube
Members:
Dominic Scott, Jesse Quin, Richard Hughes, Tim Rice-Oxley, Tom Chaplin
Variations:
Viewing All | Keane
Kean, The Hairy Sheep, キーン, 基音, 基音乐队