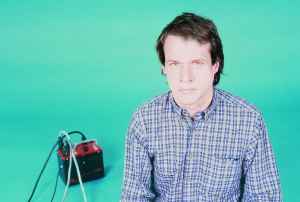 Russell was raised in Oskaloosa, Iowa, where he later studied the cello and began to write his own music. In the early 1970s, he moved to California and studied Indian music at the Ali Akbar Khan School in San Francisco. He met Allen Ginsberg, with whom he began to work, accompanying him on the cello while Allen sang or read his poetry.

In the mid 1970s, Russell moved to New York City. After an initial period of uncertainty, he contributed to The Flying Hearts in studio work and, occasionally, in performance with David Byrne, Rhys Chatham, Jon Gibson, Peter Gordon, Jerry Harrison, Garret List, Andy Paley, Leni Pickett and Peter Zummo. From 1975 to 1979 this ensemble, together with Glenn Iamaro, Bill Ruyle, and Jon Sholle, performed and recorded the orchestral composition of Instrumentals (Disques du Crépuscule, 1984, Belgium).

In 1978, Russell wrote and produced "Kiss Me Again", under the name Dinosaur. It was the first disco single to be released by Sire Records, and the first of many of Russell's innovative dance tunes. This was followed by "Is It All Over My Face" by Loose Joints, released in 1980. In 1982, Russell and William Socolov founded Sleeping Bag records and their first release was his "24-24 Music". The number "Go Bang", which originated from this album, was remixed as a 12" single by Francois Kevorkian.

In 1983, the album "Tower Of Meaning" (Chatham Square) was released. This compelling and meditative recording, conducted by Julius Eastman, represents just a fragment of a much larger composition, which includes voices along with its instrumentation. At the same time, he continued to release dance singles such as "Tell You Today" (4th And Broadway, 1983) an upbeat dance groove featuring the vocals of Joyce Bowden. Additional dance tunes included "Wax The Van" (Jump Street, 1985) with vocals by Lola Blank, wife of notorious Bob, "Treehouse/Schoolbell" (Sleeping Bag, 1986) and "Let's Go Swimming" (Upside/Rough Trade, 1986).

During the mid 1980s, Russell gave many performances, either accompanying himself on cello with a myriad of effects, or working with a small ensemble consisting of Mustafa Ahmed, Steven Hall, Elodie Lauten and Peter Zummo. 1986 saw the release of "World Of Echo" (Upside/Rough Trade, 1986), which incorporated many of his ideas for pop, dance and classical music for both solo and cello format. This critically acclaimed album was included in Melody Maker's "Top Thirty Releases of 1986". Russell also collaborated with a number of choreographers, including John Bernd, Diane Madden, Alison Salzinger, and Stephanie Woodard.

November 17, 2022
Sometimes I've wondered (in the privacy of my own head) if I only like Arthur Russell because I think I'm supposed to. That said I have learnt repeatedly over the years that 1) my musical instincts are far from flawless but really not bad, and 2) that there's been many critically acclaimed works across various genres that I've not initially got so kept quite about out of insecurity, and then later, sometimes much later, revisited and thought "oh right ok I see it now". Not that I necessarily disliked them to begin with, just that I realised later I wasn't quite ready for them first time around. In retrospect it seems as though there was always some kind of instinctual attraction or at the very least interest, but maybe this is just rationalisation, it's hard to tell or know if you're really being honest with yourself. I have had this experience with Russell's work, partially, and I believe I will continue to do so, although there's so very much other music and sound always to listen to, but he's on my shelf and won't be going anywhere anytime soon. I appreciate the weirdness, the wonkiness, the oddness, the intimacy, the beauty and simplicity, and of course the uniqueness. His story is sad, and uplifting, and fascinating. A colleague of mine booked him for a gig many years ago and said he was a very sweet, very softly spoken guy. It's a long time since I saw it but I remember liking the film Wild Combination. I am very thankful that the kinds of things Russell made, things of such peculiarity and fragility and often lack of obvious functionality, get to exist and be experienced in our world, and that there are people such as Russell, and many others, who are committed to their artistic or creative path and brave enough to walk it, as I would like to wish I were. Most of all I thought it was important that there was something other in the comments section under such an artist as Arthur Russell than that awful negative shit below.

A handful of good disco cuts (the good ones being the ones he did not SING ON)--YES.
Genius?--NO (IMO of course)