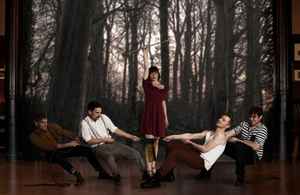 Profile:
Skinny Lister are a British folk band formed in London in 2009. Initially performing as a five-piece band until October 2013 when a drummer was added.The band were formed in London in 2009 having met through folk clubs in Greenwich. Prior to forming Skinny Lister, Dan Heptinstall, Sam Brace and Dan Grey had played together in Indie band The Alps.
Dan Gray left the band in the summer of 2012 and was replaced with Michael Camino from Hawaii, USA. In the spring of 2013 Sam Brace left the band and was replaced by Andy "Slim" Black; he has since rejoined. In the autumn of 2013 the band expanded to a six piece with the addition of drummer Dave.[4]