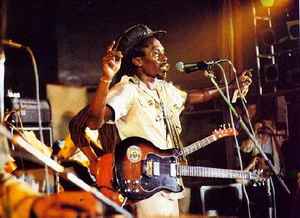 Prince Lincoln Thompson was one of the sweetest and most profound roots singers of the late 70s and early 80s, but never achieved the success of many of his better known contemporaries. With his soaring falsetto voice and great song writing abilities he was another groomed for crossover success after the death of Bob Marley but that success eluded him

He started as a singer in rocksteady group The The Tartans with friend and collaborator Cedric Myton, later of The Congos and recorded a few tracks for Clement "Coxsone" Dodd. But on becoming a Rastafarian in the mid 70s he formed the vocal group Royal Rasses with Myton and a range of other harmony singers including Clinton Hall, Keith Peterkin and Jennifer Lara

His chance at the big time came when signed to the United Artists offshoot Ballistic Records, in 1979. He recorded the short but classic "Humanity" LP which didn't achieve commercial success, toured Europe extensively to support the follow up "Experience" but after "Ride With The Rasses" (another classic) was also unsuccessful he was then persuaded to collaborate with Joe Jackson on "Natural Wild". This costly commercial failure essentially sent Ballistic bankrupt and Prince Lincoln returned to Jamaica and withdrew from the music business.