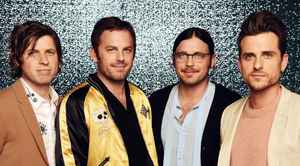 Profile:
Kings of Leon are a rock band made up of three brothers and their first cousin (Matthew) from Tennessee, USA, formed 1999. On their first two albums the band performs a mix of southern rock, garage rock, hard rock, country and blues. After touring with U2 they changed their style and image into indie/arena/pop rock. The group's name is derived from Nathan, Caleb, and Jared's father and grandfather, both named Leon.
Sites:
kingsofleon.com, Facebook, instagram.com, MySpace, Wikipedia
Members:
Caleb Followill, Jared Followill, Matthew Followill, Nathan Followill
Variations:
Viewing All | Kings Of Leon
King Leon, The Kings Of Leon, _Kings_Of_Leon_

June 9, 2020
Unbelievable at how much they've achieved. Massive band for me and makes me able to say I like country music even though its more like Classic Rock sometimes.
They are weird and quirky but they never fail to produce a good album!, Been listening since 2008 and still keen for this new album.
KOL 90/100