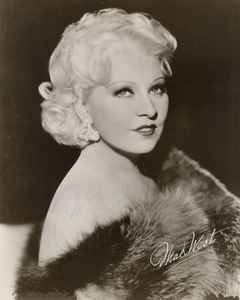 Famous for her bawdy double entendres, West made a name for herself in vaudeville and on the legitimate stage in New York before moving to Hollywood to become renowned as a comedienne, actress and writer in the motion picture industry. One of the most controversial stars of her day, West encountered many obstacles including early censorship and sexism. Perhaps her most famous quote is: "Is that a gun in your pocket or are you just happy to see me?" When her movie career ended, she continued to perform on stage, in Las Vegas, in England, on radio and television, and recorded some rock and roll albums.

In order to keep her appeal fresh with younger generations, she recorded two rock and roll albums, "Way Out West" and "Wild Christmas" in the late 1960's. The single "Treat Him Right," from "Way Out West", made the album a financial success. She also recorded a number of parody songs including "Santa, Come Up and See Me Sometime," on the album "Wild Christmas". West recorded another album in the 1970's on MGM Records titled "Great Balls of Fire", which covered songs by Elvis Presley, The Beatles and The Rolling Stones.

Mae West is one of the people to appear on the famous cover of The Beatles' 1967 album "Sgt. Pepper's Lonely Hearts Club Band". When permission to use her likeness was requested, she refused. "No, I won't be on it. What would I be doing in a lonely hearts club?" In response, The Beatles personally wrote a letter asking her to reconsider. She changed her mind.
Sites:
allaboutmae.com, Wikipedia, imdb.com
Variations:
Viewing All | Mae West
Mae West Sings

August 3, 2021
The weblink allaboutmae is expired. Is there a new/Current site?
Reply Notify me Helpful