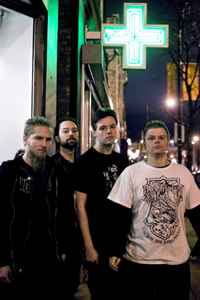 Profile:
Cyanotic began in 2002 with members Sean Payne and Drew Rosander. After their start two months later they released "Mutual Bonding Through Violation." This album got very postive ratings from their peers. Now (2005) after two year of tweaking and mixing they have enrolled another member, Brian Blake and released "Transhuman" the full length successor to "MBTV," with help from Jason Novak and Chris Cozort.