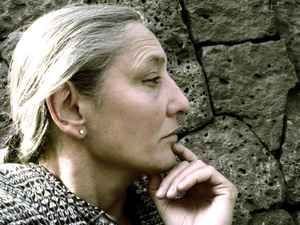 Profile:
Liliana Felipe, one of Latin America's foremost singers and composers, was born in Argentina in the 1950s. She left for Mexico just before the outbreak of the 'Dirty War' (1976), but her sister and brother-in-law were both 'disappeared'--victims of the military dictatorship's criminal politics. In Mexico, Liliana went to one of Jesusa Rodriguez's performances. Jesusa, catching a glimpse of Felipe in the audience, remembers saying to herself: "I am going to die with that woman." Since then, Liliana and Jesusa have created two performance spaces, El Cuervo and later El Habito. They 'married' in February, 2000. Liliana's music has a wide following in Latin America. She continues to be a powerful presence in Argentina, working with human rights organizations--especially H.I.J.O.S. (the organization of the children of the disappeared).
Sites:
hemi.nyu.edu, Wikipedia