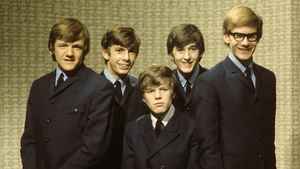 Profile:
Herman's Hermits are an English beat rock band formed in Manchester in 1964, originally called Herman & the Hermits. Harvey Lisberg discovered them and signed on as their manager. He sent a plane ticket to Mickie Most so that he could come up from London to see the band play in Bolton, and Most became the group's record producer, controlling the band's output. He emphasised a simple, non-threatening, clean-cut image. This helped Herman's Hermits become hugely successful in the mid-1960s.

Their first hit was a cover of Earl-Jean's "I'm into Something Good" which reached number one in the UK Singles Chart and number 13 in the US in late 1964. They never topped the British charts again, but they had two number one songs on the US Billboard Hot 100 with "Mrs. Brown, You've Got a Lovely Daughter" and "I'm Henry the Eighth, I Am". These songs were aimed at a US fan base, with Peter Noone (singer) exaggerating his Mancunian accent.

Their US records were released on the MGM label, which often featured their musical performers in Metro-Goldwyn-Mayer films. The Hermits appeared in several MGM movies, including When the Boys Meet the Girls (1965) and Hold On! (1966). They also starred in the film Mrs. Brown You've Got a Lovely Daughter (1968) and appeared in the 1965 anthology film Pop Gear.