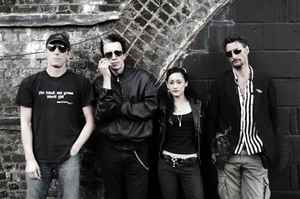 In the American deep south during the 1930s, two black men were hung for allegedly raping a white woman. Their case becomes a symbol for miscarriages of justice and they went down in history as the Alabama 2.

Over half a century later in South London, the son of a Welsh Mormon preacher meets the offspring of a Glaswegian trades unionist at an underground acid house party and they embark upon the mischievous miscegenation of Hank Williams, gospel and acid house.

Expanding in the mid '90s into a Brixton based collective, they called themselves Alabama 3 and continue to be one of the most joyous, righteous, provocative and inspirationally delinquent bands Britain has ever spawned.

Sweet acid house country is what they call their music themselves, one of the most original groups to emerge from the UK in a long time. Musically skilled (as evidenced by the acoustic "Last Train to Mashville Vol.2"), constantly inventive, they mix the best parts of dance music with liberal doses of country, folk, gospel and more. Toppped up with radical left-wing politics and an interest in promoting human rights, Alabama 3 are a band to check out - especially live. It's a pity, though, that most of their singles are full of remixes that miss the point of the band and, to be honest, suck.