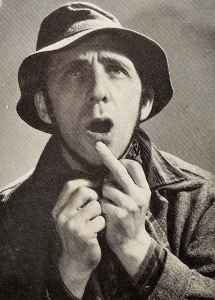 Real Name:
Isadore Cutler
Profile:
Ivor Cutler (Glasgow 1923-01-15 - London 2006-03-03) was a highly eccentric artist, poet, singer, songwriter, storyteller, broadcaster, author and teacher. He appealed to successive generations with his offbeat sense of humour and wonder at the world. In more than four decades of performing he attracted a band of admirers and followers that included, amongst others, the philosopher Bertrand Russell, Beatles John and Paul, and John Peel. Cutler also wrote books for children and adults and was a teacher at A. S. Neill's Summerhill School and for 30 years in inner-city schools in London. He retired from the stage at the age of 82 and following a brief period of Alzheimer's and ill-health, he died on 3 March 2006, aged 83.
Sites:
ivorcutler.org, hoorgihouse.kudosrecords.co.uk, Wikipedia
In Groups:
Ivor Cutler Trio
Variations:
Viewing All | Ivor Cutler
Cutler, I Cutler, I. Cutler, Ivon Cutler