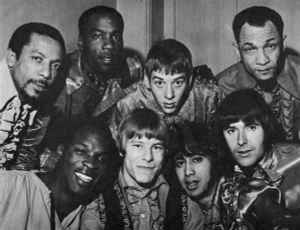 Profile:
The Foundations were a British soul band, active from 1967 to 1970. The evolved out of a group called The Ramong Sound aka The Ramongs. They were an eight man multi-racial group made up of three white Londoners, four West Indians and a Sri Lankan. For approximately one and a half months Arthur Brown was in the group. They were originally discovered by Ron Fairway and were briefly managed by Fairway and Barry Class until Fairway was ousted leaving Class in charge.

They had a number 1 hit with their first release, "Baby, Now That I've Found You", They followed up with "Back On My Feet Again" which went to number 18 and "Any Old Time (You're Lonely Or Sad)" which got to number 48.

The original lead singer Clem Curtis and another member, tenor sax player Mike Elliott left in 1968. The Foundations had two more big hits with Curtis's replacement, lead singer Colin Young. "Build Me Up Buttercup" went number 2 in 1968 and In The Bad Bad Old Days" which went to number 8 in 1969. The group's last chart entry was with their own composition "Born To Live, Born To Die" which charted number 46.