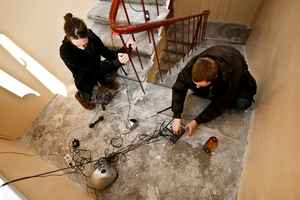 Profile:
Phonic Psychomimesis was conceived at the fall of 2009 in Riga, by two course-mates of philosophy studies who united their will to create an experimental works of sound. The participants of the project are confederates hardcore reflecting on the sound art - they come together irregularly to work on specific topics.

The duo pays close attention to various strange sound details of objects and occurances that inhabit our everyday life and space around us - both associatively independent from their materialistic origins or simply vivid and special audio marginalities, viewing them as seperate beings and enjoying their sonic autonomy. Guys are perceiving the beauty of these sounds exactly in their intangibility and, in order to experience them as long as possible, they seek to adopt them and to produce an ideally fixed, finite loop similar to gif image.

Phonic Psychomimesis are using the zoom of their hearing, makes a sonic autopsy, removing the sounds out of their surroundings and inspecting them seperately under the magnifying glass. Project works with the imaginative analysis of sound, focusing on constructing unreal audio situations where the result of the synthesis of different records has rather purely aesthetically grasped identity than empirically descriptive and documenting side. There are dense compositions made, where the thick structures of sound leaves a very tiny space for conceptually stimulated emotional atmospheres.

The title of the project should be understood as a mimetic imitation of basic-atoms of psychical conditions via sound. In the theories of
mind psychomema is an analogue for semema or the core element of the meaning in semantics.
Members:
Raitis Upens, Rihards Bražinskis