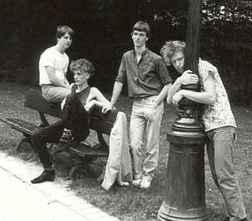 Profile:
Belgian new wave/punk rock band, formed in 1978 by Peter Slabbynck, Geert Maertens (guitars) and Johan Isselee (drums). Originally the band was called The Bungalows but after some time they changed their name into Red Zebra.

In 1986 the band broke up, but the 3 original members got back together in 1990 and started to play under the Red Zebra banner again.