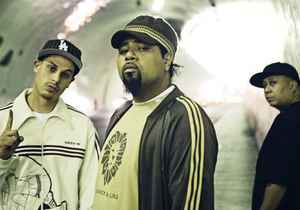 Profile:
Evidence, Rakaa and DJ Babu joined together in 1992 and released "Third Degree" (1997) and "Work the Angles"(1998) on ABB Records, developing a solid fan base in the underground hip hop community.

They had previously recorded an album titled "Imagery, Battle Hymns & Political Poetry" that was never released (1995), although many fans still have it on bootlegged tapes.

The group eventually signed with Capitol Records and released The Platform (2000) to more critical acclaim. Its second set, Expansion Team, was released in 2001 led by The Alchemist-produced "Worst Comes to Worst," which utilized a vocal sample from Mobb Deep's "Survival of the Fittest" and a musical sample from William Bell's "I Forgot to be Your Lover."

The group's third album, Neighborhood Watch, was released in 2004 and debuted at #55 on USA's Billboard 200 Albums Chart. In addition to the Kanye West-produced single "This Way," it featured the single "Who's Who?" which was also included as a track on the Need for Speed: Underground and SSX 3 soundtracks. It peaked at #35 on the UK Singles Chart.