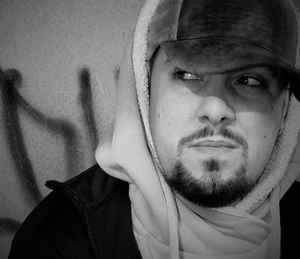 He began making rhymes and beats in his room (which came to be known as Quarto Mágico), and after listening to Souls Of Mischief - 93 'Til Infinity he decided to devote himself to music full time. First he showcased his work on the radio, specially on José Mariño's Repto, a cult hip-hop program aired on Antena 3.

His first two albums, Entre(tanto) and Sobre(tudo), released in 1999 and 2001, respectively, were promising debuts from a talent on the rise, and convinced Rui Miguel Abreu to sign him on his newly-founded Loop:Recordings. But his breakthrough came with the release of Sam The Kid - Beats Vol.1 - Amor, a conceptual album of instrumental hip-hop based on the love story of his parents, recorded at home from his own private pool of samples (spanning pornographic films, phone calls, soap operas and soul and jazz records), that won the acclaim of audiences and critics alike.

He solidified his status as one of Portuguese hip-hop's staple names with the release of Pratica(mente) in 2006, featuring an eclectic roster of artists, from jazz musicians to radio hosts to his fellow emcees and lifetime friends. In that same year he also made O Crime Do Padre Amaro (Banda Sonora Original), the soundtrack to Crime do Padre Amaro, a film adaptation of a Portuguese literature classic.