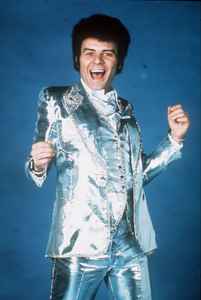 Real Name:
Paul Francis Gadd
Profile:
Born: May 8th, 1944 (Banbury, Oxfordshire). Flamboyant glam-rock singer whose over-the-top performances made him one of the most successful UK acts of the 1970s. Gadd started his recording career as Paul Raven (2) in 1960, although a succession of singles under this name (and later as Paul Monday) made little impact.

In 1971, with management by Mike Leander, he jumped on the glam bandwagon, releasing the single "Rock N Roll" under the name Gary Glitter. It reached the top ten in both the UK and USA. Although his only major hit state-side, it was the first of many in the UK, under the guidance of Rock Artistes Music Ltd..

Glitter's releases were, for the most part, fairly basic, but were made successful by his bravado and strutting showmanship. The hits dried up in the mid-70s, though he remained in the public eye via live performances and a 1984 comeback "Another Rock N Roll Christmas", as well as being sampled by (and appearing on TV with) The Timelords for their 1988 chart-topper "Doctorin' The Tardis". He went into semi-retirement in the 1990s, putting most of his musical energy into his annual Christmas gigs. However, his musical career ceased in 2000 after a 1999 conviction for child pornography, although he has stated plans to make a comeback as a musician, with at least one album planned.