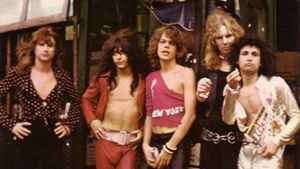 May 6, 2011
Blackie Lawless should NOT be listed as a member, let alone a vocalist (he played guitar). He was picked up for a handful of shows to help the band finish their final US tour leg in Florida. If nobody takes issue with that, I wanna remove him from the list of members.
See 2 replies

October 26, 2009
Without any doubt, the New York Dolls were the seminal group of the New Wave movement in New York. The first group, formed in late `71, consisted of Johnny Thunders (then known as Johnny Volume), Kane, drummer Billy Murcia and guitarist Rick Rivets. The original name of the group was to be Actress, but when JoHansen (David Johansen) joined in early `72, they became the New York Dolls, soon afterwards substituting Sylvain Sylvain for Rivets. On a visit to Britain in November '72, Murcia died, allegedly of a drug overdose, and his place was taken by Jerry Nolan.
The most alarming thing about the Dolls was their appearance- "stack-heeled platform boots and bird´s nest coiffures" amounting to a grossed-out dyke look, complete with lots of leather and make-up. This bizarre image reflected a reportedly wild lifestyle and startled many observers.
The Dolls eventually signed with Merury Records after practically every other label had checked them out, but been deterred by their appearance. With Mercury, the Dolls made two albums, the first, simply titled New York Dolls, being produced by Todd Rundgren, and released in `73, and Too Much Too Soon, produced by Shangri-Las` producer Shadow Morton, coming out in `74.
Critical reaction to the group was decidedly negative, with the result that Nolan and Thunders eventually left while touring in Florida. However, before that the group had acquired a new manager in Malcolm McLaren, later to be the man behind the Sex Pistols. He met the group in 1974 when they came into his King`s Road, London, shop Let It Rock. A friendship developed and McLaren began to manage the group in early `75 in New York. He had inherited many problems, not least two of the group having to be hospitalized for drug abuse. In addition, the image so carefully nurtured during the group´s early days was by then out of date, having been largely overtaken by the "undernourished" look adopted by such as Tom Verlaine and Patti Smith. The group thus took on a `Communist chic`, playing in front of a `hammer and sickle` flag, dressed in red patent leather. Unfortunately, this image didn`t appeal to the audiences very much, and when Thunders and Nolan left, McLaren returned to Britian, and soon afterwards discovered the Pistols.
Thunders and Nolan got together with Richard Hell (bass), who had nearly joined the Dolls during the McLaren era, and Walter Lure (guitar), who had previously been in agroup called Demon, to become the Heartbreakers. JoHansen and Sylvain recruited Chris Robinson (keyboards), Peter Jordan (bass) and Tony Machine (drums) for a Japanese tour, but after it the fragmented Dolls broke up in May `75.
Thunders and Nolan remained in the Heartbreakers; Sylvain formed a group called Criminals in New York in April `77, Kane, after starting a band called Killer Kane in Los Angeles, became a member of LOK, back in New York. By mid-`77 David JoHansen started working on his first solo album for Blue Sky Records (the company owned by Johnny and Edgar Winter and their manager Steve Paul).
The New York Dolls were the originators of a hard, rough, raunchy rock sound which has been copied by numerous groups subsequently. There is no reference point, except perhaps the Stones at their most outrageous. The group`s attitude to what they were trying to do has been a great source of inspiration to many of those who have successfully followed their lead.