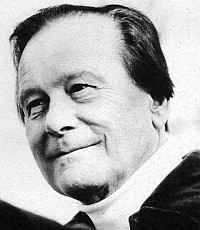 Profile:
German composer and educator, born 12 May 1928 in Marktoberdorf, Germany and died 29 December 2008 in Salzburg, Austria. He was the grandfather of Tobias Regner.

Hermann Regner studied conducting and composition at the Leopold Mozart Conservatory in Augsburg, then musicology and popular culture at the Ludwig Maximilian University in Munich. From 1958 to 1964 Hermann Regner was a lecturer at the University of Music in Trossingen, 1964-1993 he was a professor of music education and elementary composition at the Orff Institute Salzburg, to whose construction he played a major role. Meeting and working with Carl Orff in the years 1963-1982 shaped has work decisively. As a longtime member of the committee and later the board of Orff Foundation he sat committed to ensuring that Orff was maintained artistic and pedagogic work and developed with new ideas, concepts and pulses continue. Leading the way was his work as co-editor and author of the teaching work "Music and Dance for Children". Hermann Regner compositions include primarily wind music and chamber and instrumental music. His special concern was to write easily playable new music for children, youth and lay people, music that takes into consideration the technical possibilities of beginners and motivates them to deal with new sounds, rhythms and playing techniques.

Hermann Regner was for many years president of the Austrian Brass Music Association (Deja) and honorary member of the Orff-Schulwerk associations in Finland, Canada, Austria and USA. For his work he has received numerous awards, including the Carl Orff medal of the Association of Bavarian singing and music schools, the large silver decoration of the Republic of Austria and the Federal Cross of Merit of the Federal Republic of Germany.
Variations:
Viewing All | Hermann Regner
Regner