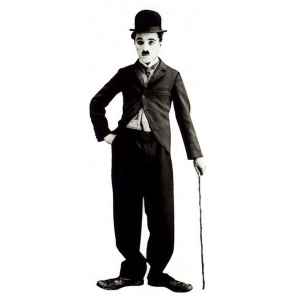 Chaplin was a British comedy actor, and one of the most important personalities in the silent film genre. One of his most famous movies is "The Great Dictator", a satiric movie about Hitler and the Nazi regime. Chaplin wrote, directed, produced, edited, starred in, and composed the music for most of his films.

Chaplin developed a passion for music as a child, and taught himself to play the piano, violin, and cello. From "A Woman of Paris" (1923) onwards he took an increasing interest in the musical accompaniment to his films. With the advent of sound technology, Chaplin began using a synchronised orchestral soundtrack – composed by himself – for "City Lights" (1931). He thereafter composed the scores for all of his films, and from the late 1950's to his death, he scored all of his silent features and some of his short films. Though Chaplin was not a trained musician & he could not read sheet music, and he needed the help of professional composers such as David Raksin, Raymond Rasch & Eric James when creating his scores, his participation & creative genius in the process could not be denied.

Chaplin's composition "Smile", composed originally for "Modern Times" (1936) and later set to lyrics by John Turner and Geoffrey Parsons, was a hit for Nat King Cole in 1954. For "Limelight", Chaplin composed "Terry's Theme", which was popularized by Jimmy Young as "Eternally" (1952). Finally, "This Is My Song", performed by Petula Clark for "A Countess from Hong Kong" (1967), reached number one on the UK and other European charts. Chaplin also received his only competitive Oscar for his composition work, as the Limelight theme won an Academy Award for Best Original Score in 1973 following the film's re-release.

As a filmmaker, Chaplin is considered a pioneer and one of the most influential figures of the early twentieth century.