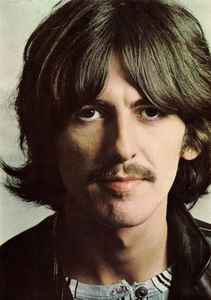 February 19, 2012
In his most obvious contribution to music as lead guitarist for the Beatles, George Harrison provided the band with a lyrical style of playing in which every note mattered. Later on, as a songwriter with the Beatles and subsequently as a solo artist, Harrison used his celebrity and his musical sensibilities to try and raise the awareness of millions of listeners about issues much bigger than music, especially the life of the spirit, and the living (and dying) situations of people in parts of the world that not a lot of westerners usually thought about. And yet, for all of that, and a journey through life that took him to musical horizons he scarcely could have imagined at his start in Liverpool, Harrison was also one of the humblest of superstars -- in his last decade, he still preferred to describe himself as "just an old skiffle man."

George Harrison was one of millions of young Britons inspired to take up the guitar by British skiffle king Lonnie Donegan's recording of "Rock Island Line"." But he had more dedication than most, and with the encouragement of a slightly older school friend, Paul McCartney, he advanced quickly in his command of the instrument. Harrison developed his technique painstakingly over several years, learning everything he could from the records of Carl Perkins, Duane Eddy, Chet Atkins, Buddy Holly, and Eddie Cochran. At 15, he was allowed to sit in with the Quarry Men, the Liverpool group founded by John Lennon of which McCartney was a member; by 16, he was a full-fledged member, and was playing lead guitar when they became the Beatles.

The Beatlemania years, from 1963 through 1966, were a mixed blessing for Harrison. The group's studio sound was characterized by very prominent rhythm guitar, and on many of the Beatles' early songs, his lead guitar was buried beneath the chiming chords of Lennon's instrument. Additionally, his aspirations as a songwriter were thwarted by the presence of Lennon and McCartney, both natural and prodigious composers whose output left little room for songs by anyone else.

Harrison was known as "the quiet Beatle" but "the reluctant Beatle" might have been more accurate, in some respects. He was the member least comfortable with the sheer masses of people that their music inspired to frenzied outbursts. He was also the one who was most concerned with pure musicianship -- one of his idols was the classical guitarist Andrés Segovia -- and knew that the quality of his playing was lost on those screaming concert audiences. It was a situation that he came to loathe.

Despite these problems, Harrison grew markedly as a musician during those years, even writing a handful of songs, including one near-classic, "If I Needed Someone"." He also played a key role in popularizing the Rickenbacker 12-string electric guitar, which became a staple of American folk-rock, especially in the sound of the Byrds. And he made his first acquaintance of the sitar, an Indian instrument whose sound fascinated him. Harrison subsequently developed a friendship with sitar virtuoso Ravi Shankar that lasted for the rest of his life; and his fame as a Beatle, in turn, helped to transform Shankar into the most well-known Indian musician in the world. By 1966, Harrison was writing music for the sitar, starting with the exquisite "Love You To" from Revolver. This was also the period in which the band, to Harrison's relief, agreed to give up doing concerts, which had become futile attempts at performance.

In the wake of that decision, Harrison's playing and songwriting grew exponentially. His interest in the sitar yielded a pair of beautiful songs, "Within You, Without You" and "The Inner Light," that were effectively solo recordings. He also wrote some clever, very personal psychedelic-style songs. And he developed a personal friendship with blues virtuoso Eric Clapton, which would have a profound effect on both their careers -- additionally, Clapton fell in love with and later married Harrison's then-wife, Patricia Boyd Harrison, who was also the inspiration for several of the best-known songs of the period by either guitarist. And, growing out of his devotion to the sitar, Harrison also developed a smooth, elegant slide guitar technique that showed up on the group's last three albums. Finally, he contributed three classic songs to those albums: "While My Guitar Gently Weeps," "Here Comes the Sun," and "Something." The latter was also the first Harrison song to appear on the A-side of a Beatles single, and not only topped the charts, but was good enough to get widely covered, including a version by no less a figure than Frank Sinatra, who called it "the greatest love song of the last 50 years."

Although never a strong singer, Harrison's vocals were always distinctive, especially when placed in the right setting. For his first solo record following the group's 1970 breakup, All Things Must Pass, he collaborated with producer Phil Spector, whose so-called "Wall of Sound" technique adapted well to Harrison's voice. All Things Must Pass and the accompanying single "My Sweet Lord" had the distinction of being the first solo recordings by any of the former Beatles to top the charts. Unfortunately, Harrison was later sued by the publisher of the 1962 Chiffons hit "He's So Fine," which bore a striking resemblance to "My Sweet Lord" -- he lost the case, in what was deemed an instance of unintended plagiarism. The album, however, was extraordinary in any context, built around some highly personal, topical songs, and some phenomenal rockers, but much of it also steeped in spirituality. It posed as many questions for the serious listener to ponder as it offered exquisite melodies and stunning production for the casual listener to revel in. And it sold about as well as any Beatles album, an even more impressive feat as a two-record set (with a bonus record, the "Apple Jam" -- which, itself, was historically important as the sessions that spawned Eric Clapton's band Derek & the Dominos).

In 1971, he organized rock's first major charity event, The Concert for Bangladesh, staged at New York's Madison Square Garden to aid that famine-ravaged nation, which yielded both a movie and a triple album. Rather ironically, for the man once known as "the quiet Beatle," Harrison found himself at the center of the international news media. What's more, he was having a decidedly easier time than his former bandmates selling his music. John Lennon's personal and political evolution yielded records that were sometimes difficult for fans to embrace; Paul McCartney was selling lots of records but was also being attacked by critics and fans for the superficiality of his work. In the most towering irony imaginable, the reluctant Beatle became the beneficiary of most of the lingering good will attached to the group.

In 1974, he organized Dark Horse Records, which -- following the end of his contract with EMI in 1976 -- became the imprint on which all of his subsequent solo work was issued. His albums from the '70s into the '80s always had an audience, but -- except for Somewhere in England (1981), released in the wake of the murder of John Lennon -- none attracted too many listeners beyond the core of serious fans. And some of his best musicianship was not in evidence on his own albums, so much as on recordings by such Dark Horse artists as Splinter. During this same period, Harrison co-founded Handmade Films, which produced such hit movies as Monty Python's Life of Brian, Time Bandits, Withnail and I, and Lock, Stock and Two Smoking Barrels.

In 1987, he released Cloud Nine, which featured his most inspired work in years, most notably a cover of an old Rudy Clark gospel number called "Got My Mind Set on You," which reached number one on the U.S. charts. A year later, with Bob Dylan, Tom Petty, Jeff Lynne, and Roy Orbison, he formed the Traveling Wilburys, who released two very successful pop/rock albums. All of this activity heralded his short-lived re-emergence from private life, resulting in a 1991 tour of Japan that yielded the album (Live in Japan) with his longtime friend Eric Clapton.

He withdrew from the public after that, devoting himself to his life with his second wife and their son. In 2000, he began work on remastering and expanding his classic All Things Must Pass album, in what was to be the first in a series of archival explorations of his post-Beatles career. Harrison had been treated for throat cancer in the late '90s, but in 2001 it was revealed that he was suffering from an inoperable form of brain cancer. At the time of his death on November 29, 2001, The Concert for Bangladesh album had been announced for upgraded reissue in January of 2002, and a DVD of the film was in release internationally. In the years since, his Dark Horse solo catalog has been re-released, as has the Traveling Wilburys library.

It's a common misconception that George's middle name is "Harold." His father and brother were both named Harold, but the youngest Harrison child of Harold and Louise did not even have a middle name.
According to his mother's diary, which was found in her attic after her death, George was actually born just before midnight, making his birthday not the 25th, but actually the 24th of February in 1943.