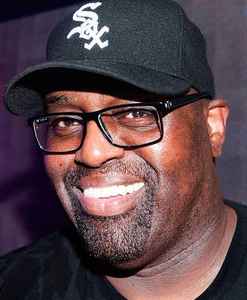 Knuckles was the DJ at the Warehouse nightclub in Chicago from 1977 to 1982. It is widely accepted that his style of DJing and his selection and the appeal of the Warehouse gave house music its name, although in the beginning, the word 'house' was used only in Chicago to denote something which was cool, hip, fresh or bad. Knuckles had been long time friends with Larry Levan, they had had their musical upbringing together from going to clubs like Loft and the Gallery.

July 22, 2019
Guess the real first record he was involved is https://www.discogs.com/it/Spunk-Tighten-It-Up/release/1566208?ev=item-vc
Spunk ‎– Tighten It Up as Mixing Consultant!
Reply Notify me Helpful

The Legend may be gone, but his music will be here forever...enjoy it...that's what he wanted...

September 15, 2014
I LOVE YOU FRANKIE FOREVER...RIP & GOD bless you! thanks 4 all timeless music!
Reply Notify me 2 Helpful

It's hard sometime.. It's not the same now :-(
Miss you very much big brother!

April 3, 2014
R.I.P Frankie,You were a true ''House Music'' Pioneer.Your music will inspire for ever!
Respect from the U.K.
Reply Notify me 5 Helpful

April 2, 2014
Sleep tight beautiful man, may you and Larry forever be playing in Heaven together.
Reply Notify me 4 Helpful

April 2, 2014
The Godfather of House has just left the house.