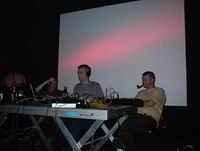 Profile:
Goem = A Russian term for shops whose products were available only to Communist Party members. Now abolished.

Goem originated with Frans de Waard in September 1996 when he got hold of a Student Stimulator (a measuring device used in hospitals). After exploring the machine for some time, Roel Meelkop joined him and together they recorded the album 'Stud Stim'. In May 1997 Peter Duimelinks also joined their ranks and they have since recorded and performed extensively in numerous venues, including Barcelona, Berlin and Amsterdam.