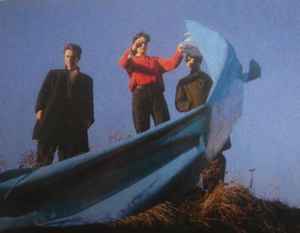 Profile:
Chakk existed between 1981 and 1987. Their first single, "Out Of The Flesh", was recorded with Richard H. Kirk and Stephen Mallinder at Cabaret Voltaire's Western Works studio and mixed and engineered by Alan Cross, a member of the band who had studio training. The track reached No. 3 in the UK Indie Chart in the Autumn of 1984. The next single "You" / "They Say", released on their own Fon Records label the following March, was also an Indie Chart top 10 and lead to publishing and recording deals with MCA Music and MCA Records.

The size of the advance they got from MCA Records is something of a legend since it was large enough to finance the building of Sheffield's first large commercial recording studio, Fon Studios, completed in the summer of 1985. The studio was designed by Alan Cross, Mark Brydon, and Marcus O'Hagan, a friend of the band. The three had backgrounds in Architecture.

Chakk's original sound was centred around Alan Cross' four track tape machine, some home built echo and effects boxes and a small mixing desk. They had always believed that the most important instrument a band could use was the studio itself.

FON became a successful commercial studio after the recording of Chakk's 1986 album "Ten Days in an Elevator", and was a focal point for local sound engineering talent. Robert Gordon, Alan Fisch, Steve Cobby, and Phil Jones (5), to name just a few, all spent time honing their skills there. Alan Cross used various pseudonyms such as D.J. Chakk and Alana Gold to record, produce and remix other acts at FON outside of his role in Chakk.

Together with ‘Black wall blue’ by Hula, ‘Take your time’ is one of my fav tracks EVER! OFFICIAL CD RELEASE PLS - Call Klanggalerie?

August 31, 2002
The bassplayer of Chakk would become a well-known English producer in the 90s. His name Mark Brydon. His most famous project? Being one half of Moloko!
Reply Notify me 3 Helpful