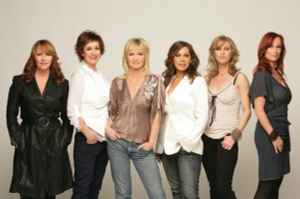 Profile:
The Dolly Dots were a Dutch girl group that existed from 1979 to 1988.The group was formed in 1978 and consisted of two singers and four dancers, although all the members sang on different songs.
They were very popular in their home country The Netherlands, but also had success in Belgium, Japan and Turkey. The Dolly Dots scored many hits in Europe and beyond. The Group achieved platinum in Japan with the song ' Radio '. 'Leila (The Queen Of Sheba) was very popular in Turkey and Egypt. Their biggest hit in their home country The Netherlands was ' Love Me Just A Little Bit More '.
Anita Heilker left the group in 1985 because of her maternity.
In 1986, the Dolly Dots went to the USA to shoot "Dutch Treat", a comedy, but the film was not very successful. In 1987 the producers Stock Aitken Waterman, were asked to produce a song that had to be the breakthrough of the group and deliver them success in the rest of Europe. This plan did not succeed.
They split up in 1988.
On 20 july 2009 one of the members, Ria Brieffies, died of lung cancer at the age of 52.
They reformed and are now currently back on tour, with huge succes, selling out veneus throughtout their homecountry.
Sites:
dollydots.com, Wikipedia
Members:
Angela Groothuizen, Angéla Kramers, Anita Heilker, Esther Oosterbeek, Patty Zomer, Ria Brieffies
Variations:
Viewing All | Dolly Dots
The Dolly Dots, ドリー・ドッツ