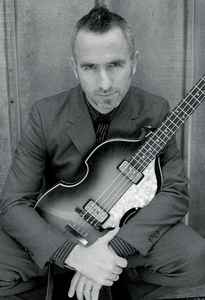 Real Name:
Paul Bushnell
Profile:
Irish-born, California-based, session bassist, producer, and music director. Even though he was classically trained at University College Dublin, and appears for a wide variety of artists, he has a preference for playing rock. Bushnell played the 'live' circuit in Ireland before he got his 'big break' through appearing in and scoring for the film 'The Commitments.' However, this did not instantly lead to his studio career taking off, which came some years later after his move to Los Angeles.

Among those for whom he has worked, are Phil Collins, Elton John, Alanis Morissette, Nelly Furtado, and Céline Dion. Since 2002, he has been the bassist and music director for Faith Hill.
Sites:
Facebook, Twitter, linkedin.com
In Groups:
Ednaswap, Papagenius! & The C-Note Music Group
Variations:
Viewing All | Paul Bushnell
Bush Bushnell, Bushnell, P. Bushnell, PB, Paul Bushell, Paul Bushnel, Paul Butchnell