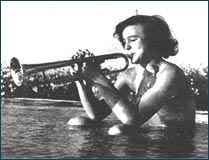 Profile:
Trumpet player Lesli Dalaba was raised in California and moved to New York in 1978, where she was involved in the Downtown improvised music scene, playing in ensembles led by Wayne Horvitz, Elliott Sharp, and La Monte Young. Despite keeping a low profile, throughout the 1980s she contributed to renovate the vocabulary of the instrument. Relocating to Seattle in 1989, she joined Jeff Greinke's Land and in 1996 formed Radio Chongching, inspired by a tour of China. In addition to her musical activities, Lesli works as an acupuncturist and practitioner of Chinese Medicine.
In Groups:
Carbon (23), Land, Radio Chongching, The New York Composers Orchestra
Variations:
Viewing All | Lesli Dalaba
Dalaba, Leslie Dalaba