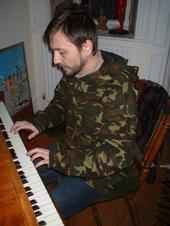 Profile:
Composer, sound artist and performer based in London.
Neil Kaczor (born 1967) studied composition with Timothy Salter at the Royal College of Music and electroacoustic music with Dr. Simon Emmerson at the City University in London. He has been involved in the creation of multimedia works, sound installations and has composed music for theatre, film and animation. His list of works by genre spawns from orchestral, chamber / ensemble, vocal, electroacoustic / acousmatic, instrumental, theatre & dance to film soundtracks.