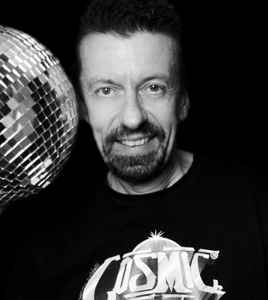 Real Name:
Daniele Baldelli
Profile:
Daniele Baldelli is a DJ & producer who is considered an innovator in the Italian disco scene for developing a unique, 'funky' and 'tribal' aesthetic by playing eclectic, esoteric records at drastically altered speeds, often slowed way down, and sometimes adding drum machines and effects. He developed the style he likes to call "Cosmic Sound". He started to be a DJ in 1969. He was resident DJ at the Baia Degli Angeli (1977–1978) and Cosmic (1979–1984) discotheques in Northern Italy—Lasize, Lago di Garda; he released scores of mixtapes during his tenure at the latter. He was mostly unknown outside of Italy until a surge of English-language press coverage in the second half of the 2000s.
Sites:
danielebaldelli.com, MySpace, redbullmusicacademy.com
In Groups:
B.D.J., Cosmic Melodies Co., Daniele Baldelli & DJ Rocca, Ethno Alchemy, Funkadiba, Sambo
Variations:
Viewing All | Daniele Baldelli
B.D., BD, Baldelli, D'Baldelli, D. Baldeli, D. Baldelli, D.Baldelli, D.J. Daniele Baldelli, Daniel Baldelli, Danielle Baldelli, Danile Baldelli

Daniel Wang: "There is indeed a story to tell: although I can't remember exactly when this all happened, probably around 2001-2003, when I started traveling from NYC to Europe more often.Through a connection made by Michael Kopelman + Fraser Cooke of Stüssy/ Gimme5 (bosses of the UK/ London streetwear scene), I ended up DJ'ing at a party in Ferrara Italy, where I met Luca Benini of SlamJam, the italian counterpart of Gimme5, distributor of Carharrt Europe, etc.

Luca and his friends (there is one more crucial figure who did a lot of translating for me, I forget whom) told me of this "lost continent" in dance music which formed their youth: The scene in Italy revolving around Daniele Baldelli, his years at Baia dell'Angelli, and the Cosmic Club there. I played with Baldelli one night and since no one had ever interviewed him in English yet, I did. I can't remember where the interview got published, but he ended talking to several more writers (Tim Lawrence possibly?) and then people started paying attention.
Baldelli gave me a dozen original cassette recordings which i listened to over and over again. Yes, they have a very different personality from NYC/US disco. And that sound was truly concocted by Daniele, it is one of most intensely creative "nuclear cores" which i know of, comparable possibly to Mancuso and The Loft, but even more amazing because Baldelli himself was playing instruments and making his own audio.
US disco/house could be distilled (in the VERY big picture) down to a 4/4 beat at about 117-124 bpm.. (Don't argue with this please, I know that there are many BPMs).
Baldelli's Cosmic Sound, however, had a "core tempo" of around 100-108. The swing value between beats can be much heavier at that speed. A typical track might be "Electric Fling" by RAH Band (100 bpm) or "Odyssey" by Johnny Harris (112 bpm but pitched down). So slowing some records down was not an arbitrary trick, it was all done "in the flow" and sounded organic.
US disco has a shrill, queer, ecstatic element which is much less important here. The Cosmic sound is intensely psychedelic, "dubby", like a long mental (as opposed to emotional) voyage. If Garage disco was cocaine then Cosmic disco was marijuana.
All i can say is, you'd have to listen to hours of tapes to get the full encyclopedic breadth of what happened there, but I must affirm, it's an amazing and still underrated chapter in Dance Music History.

One minor point to add: the US and English-speaking world dictate a lot of what gets written about pop culture, which puts some indigenous scenes which happened elsewhere at a disadvantage. Since the US tends to classify pop culture as "black" or "white", a lot of nuances about European phenomena get lost in translation.
In terms of dance music, Italy is a very special country (made up of many distinct regions). Italians have the sun, the ocean, and a connection to family/tribe and to rhythm which is quite different from the Germanic northern lands. I shouldn't need to repeat how many US disco DJs who helped create the genre have Italian roots.
Growing up in Italy, you're intensely aware of the past, from Rome thru the Renaissance. You really become aware of "what made Europe". I think that awareness is what helped Baldelli to imagine blending an electronic version of Ravel's "Bolero" with drum machine rhythms underneath, which is just one of hundreds of moments in his mixes.
By the way, the word "house" (as in "house music") comes from Greek into Latin (Xasa>> casa) which then became German and English (Haus>> house).
So you see? All roads lead back to Rome..."