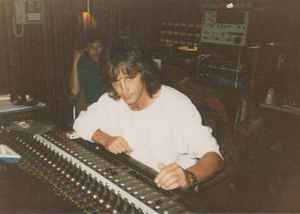 Profile:
Mark Dodson, born September 10, 1953 in London, England, is a prolific record producer and sound engineer who mostly works with artists in the heavy metal genre. He is best known for producing albums by Anthrax and Suicidal Tendencies.

In late 1980s and early 1990s, Dodson worked with Anthrax to produce two of their albums State of Euphoria (1988) and Persistence of Time (1990) as well as the Europe-only EP Penikufesin (1989) and the Attack of the Killer B's (1991) compilation. Around 1992, Anthrax and Dodson discontinued their collaboration and the band had Dave Jerden produce their next album, Sound of White Noise (1993).

Dodson also produced the Suicidal Tendencies albums How Will I Laugh Tomorrow (1988), Controlled by Hatred/Feel Like Shit...Déjà Vu (1989) and Lights...Camera...Revolution! (1990) as well as the Still Cyco After All These Years (1993) compilation. The band parted ways with him in 1991 while they decided to move in a different musical direction for their next album, The Art of Rebellion (1992). Dodson also worked with the Infectious Grooves, a project featuring Suicidal Tendencies members, to produce their first two albums, The Plague That Makes Your Booty Move (1991) and Sarsippius' Ark (1993). Dodson also produced the Electric Love Hogs only release in 1992. Tommy Lee Co-produced two tracks on this album with Dodson.
Variations:
Viewing All | Mark Dodson
Dodson, M. Dodson, Marc Dodson, Mark, Mark 'Johnny Gash' Dodson, Mark Dobson, Mark Dodson (Johnny Gash), Mark Dodsor, Mark Lodson, Mike Dodson