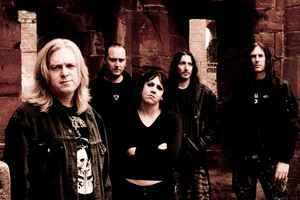 Profile:
Bolt Thrower were a British death metal band from Coventry, England. They formed in 1986 as "Bolthrower" and changed to the commonly known spelling after their first official practise rehearsal demo in December. In September 14th 2016, a year after the death of Martin "Kiddie" Kearns, the band disbanded.

October 4, 2020
Of course I can understand how deep was and still is the pain of Martin Kearns' tragic death. We the fans was shocked the same as the remaining 4 band members. More painful was one year later the message that the band decided to split up. Yes, the loss of Martin is tragic. But why not continuing Bolt Thrower with Andy Whale? (hard to believe if they didn't spend a thought about him) He is not somebody else, he was part of the band for a long time. I can't imagine that there are any musical or personal differences/problems. And Martin had surely not the wish that Bolt Thrower will end. Even if they never would make a new album it would be precious and highly appreciated to see Bolt Thrower on tour from time to time. THIS band is so unique and missed very much. It would be great if they would rethink their decision and come back soon - and why not with Andy?
BOLT THROWER are one of the BEST! We will remember them ... FOR VICTORY!
See 2 replies

June 20, 2018
Fake CD's of the first four albums circulating, beware!
At least a few russian sellers in ebay are offering the first four Bolt Thrower albums on cd, either as a bundle or separately. For an example the Realm of Chaos cd with the original cover art in mint condition should ring some bells. The cover art on these is actually done pretty accurately, but the matrix text of the cd's reveal that they are from the same factory, although they might say "Mastered by Nimbus" or such. Anyway it's pretty easy to tell they don't look at all Nimbus or MPO (etc.) cd's.
Be careful with these!