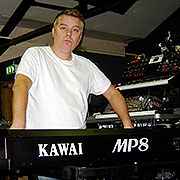 Born London 1961. Simon Ellis is a tour musical director in the UK. He worked on the 2008 Spice Girls world tour. He is also a songwriter and producer.
He began his music career as a member of the band Ellis Beggs and Howard which led to him being the musical director for world tours such as Britney Spears 2009 Circus tour, Spice girls Girl Power and 2007 Reunion world tours, S Club 7, Belinda Carlisle, East 17, D:Ream and Jamelia.
Simon began songwriting in 1999 and his first hit was the S Club 7 song "Two In A Million". He continued to have success with S Club 7 and was nominated for an Ivor Novello award for best song for "Never Had A Dream Come True". He also wrote the UK No. 1 hit "Don't Stop Moving".