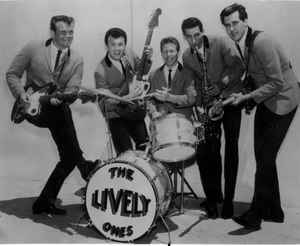 Profile:
Surf band from Southern California.
The Lively Ones made recordings built around storming, reverb-drenched Fender guitars embellished by occasional raunchy sax breaks. Over a period of about 12 months, they ground out about five albums, filled out with many covers or retitled numbers based on rock and R&B compositions. They had a couple of hits in the L.A. area in 1963 ("Surf Rider" and "Rik-A-Tik"), but their best moment was probably "Goofy Foot," whose staccato gunfire of riffs deservedly propelled the track onto several modern best-of-surf anthologies. They ranged far and wide for source material, giving surf treatment to "Telstar", "Exodus", "Rawhide", and Cole Porter's "Night and Day."
Members:
Ed Chiaverini, Jim Masoner, Joel Willenbring, Ron Griffith, Tim Fitzpatrick
Variations:
Viewing All | The Lively Ones
Lively Ones